USL League One Team of the Week - Week 7 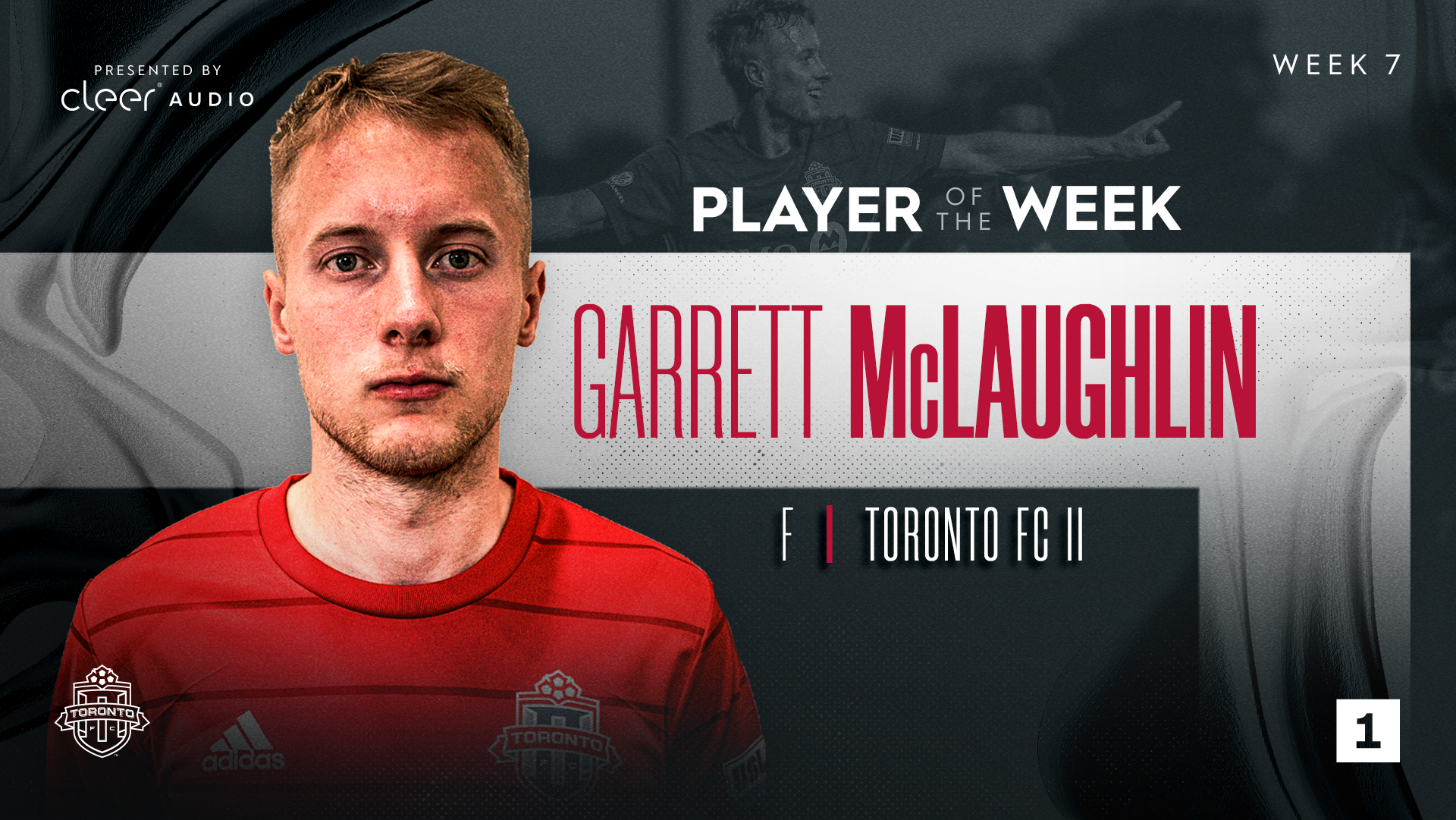 TAMPA, Fla. - USL League One announced on Monday the Team of the Week Presented by Cleer Audio for Week 7 of the 2021 regular season, with Toronto FC II forward Garrett McLaughlin named Player of the Week after scoring both of his team’s goals in its 2-1 win over North Texas SC.

In TFC II’s first competitive match since October 2019, the 23-year-old McLaughlin was the driving force behind his side’s victory. He opened the scoring just before halftime with a coolly-dispatched penalty kick, and added his second six minutes after the break. Latching on to a long diagonal pass from teammate Themi Antonoglou, McLaughin took one touch to control before connecting sweetly with the bouncing ball, firing a low shot to the far post which proved to be the match winner.

Greenville Triumph SC’s 1-0 away win over South Georgia Tormenta FC sees the South Carolina club lead all clubs with three players selected to the Team of the Week. 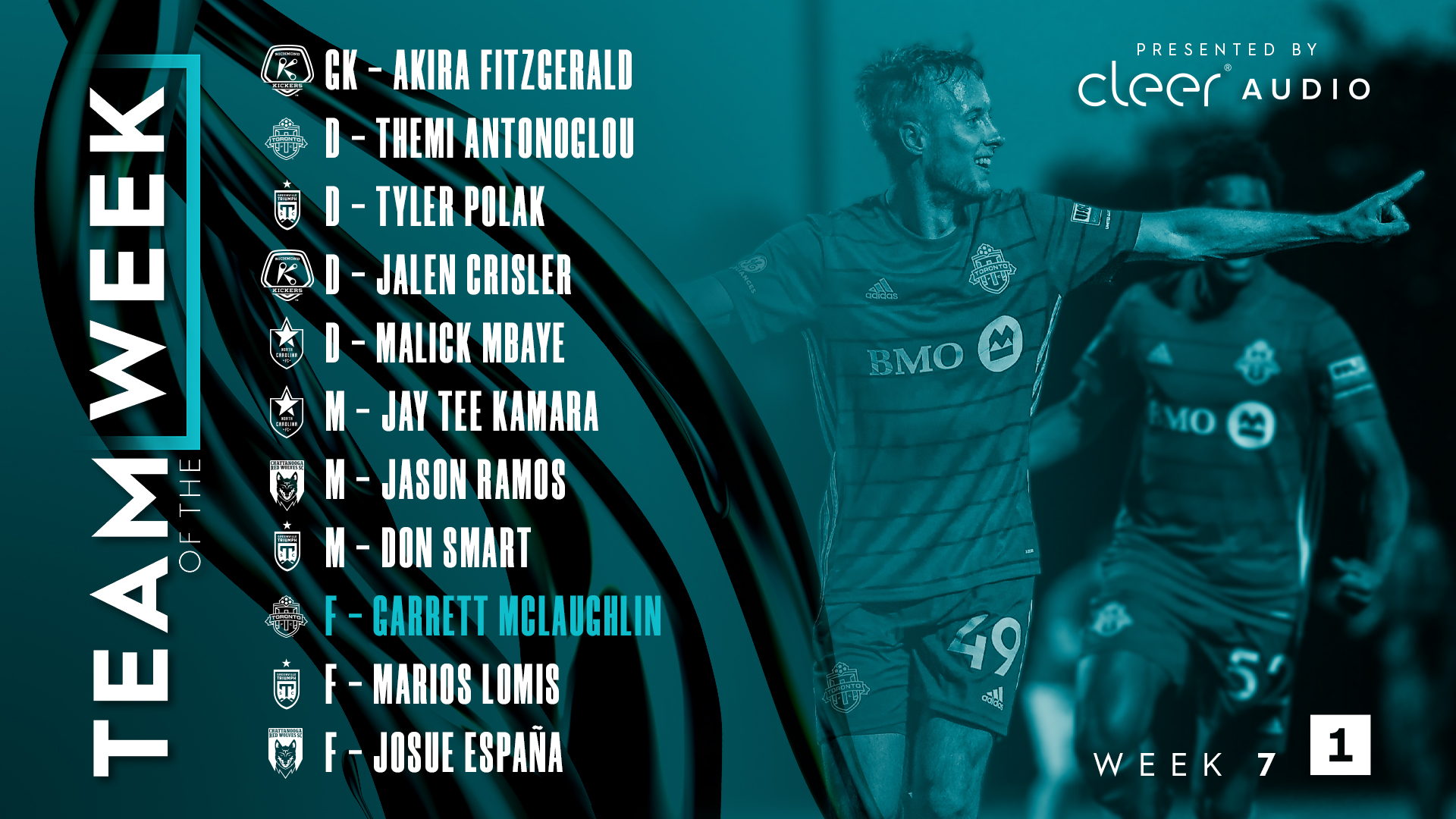 D - Themi Antonoglou, Toronto FC II: Antonoglou was everywhere for TFC II on Saturday night. He picked up the assist on McLaughlin’s game-winning goal, led all players in the match with four chances created, and made two successful tackles to round off a solid performance.

D - Jalen Crisler, Richmond Kickers: Crisler put in an excellent defensive shift to prevent a hungry North Carolina FC attacking unit from finding the net. He made seven clearances, won five duels and passed at an 88 percent success rate on the night.

D - Malick Mbaye, North Carolina FC: Mbaye was a big reason why the Kickers struggled to create on Saturday. He won 6 of 7 duels, made seven clearances, and completed 89 percent of his 80 attempted passes.

M - Jay Tee Kamara, North Carolina FC: Kamara was at the heart of everything for NCFC, providing the team with a spark going forward. He led all players in the match in a number of key categories, including dribbles completed (nine), chances created (seven), and duels won (10).

M - Don Smart, Greenville Triumph SC: On a night where Triumph SC struggled to create for long stretches, Smart proved to be the difference between one point and three. In addition to his assist on Marios Lomis' goal, he created four chances overall, completed two dribbles and passed at an 84 percent success rate.

F - Garrett McLaughlin, Toronto FC II: TFC II registered only 35 percent possession in its win over North Texas, and as such, McLaughlin didn’t compile a ton of touches. But he made the ones that he did get count, recording all of his team’s three total shots on target and scoring with two of them.

F - Marios Lomis, Greenville Triumph SC: Though he was on the fringes of the action for much of the match, like all good strikers, Lomis came through when it mattered most. The Greenville forward’s terrific curling strike resulted in the game’s only goal and a win for his side, Lomis’ league-leading fifth goal of the season.

F - Josue España, Chattanooga Red Wolves SC: España continued his fine run of form on Saturday, scoring Chattanooga’s first goal on the night - his third in the last two games. He created one additional chance in the match as well.