USL League One Team of the Week - Week 6 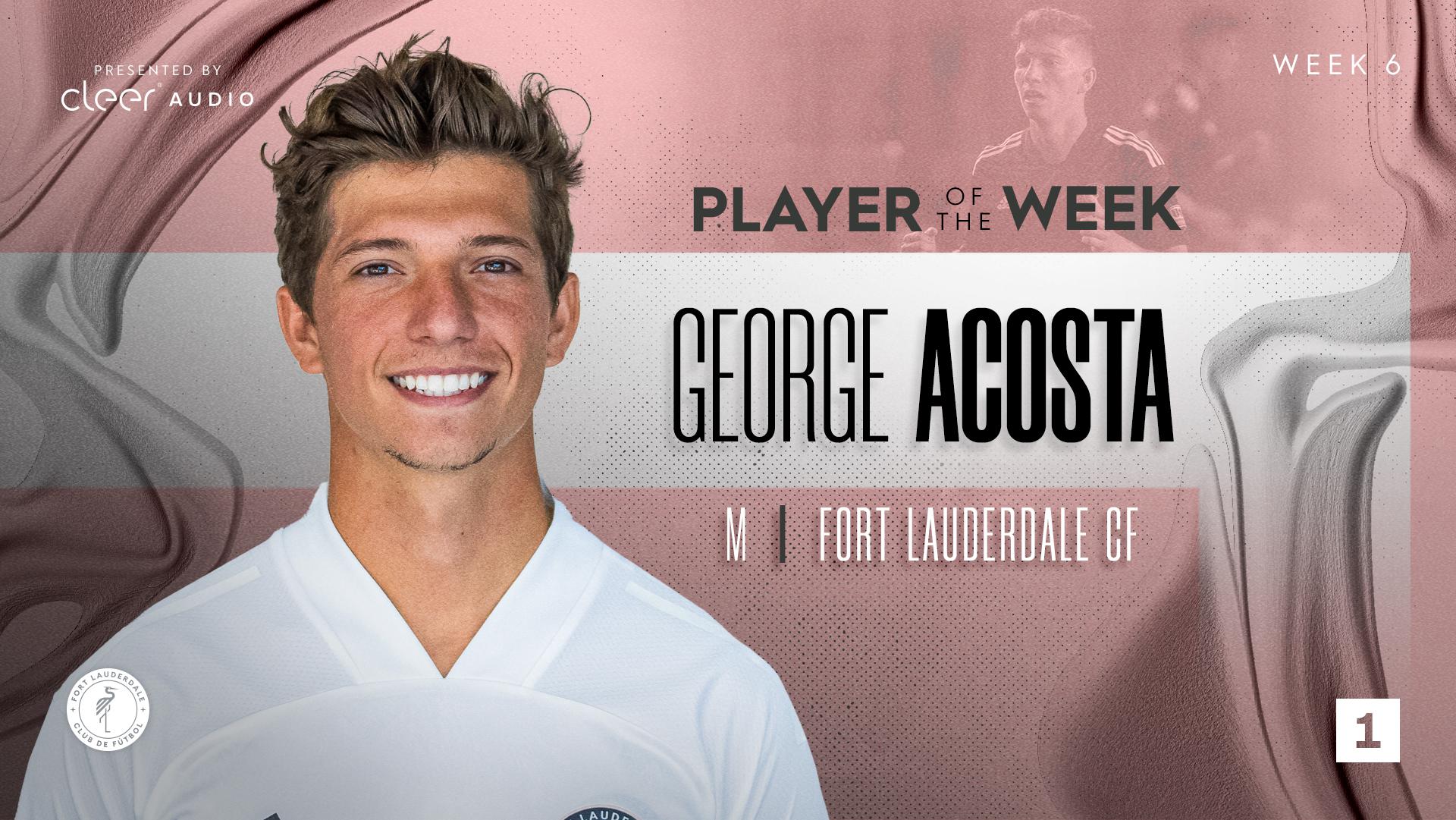 TAMPA, Fla. - USL League One announced on Monday the Team of the Week Presented by Cleer Audio for Week 6 of the 2021 regular season, with Fort Lauderdale CF midfielder George Acosta named Player of the Week after recording a goal and two assists in his team’s Sunday night win against FC Tucson.

The 21-year-old U.S. youth international played in Abel Caputo with a slick through ball as Fort Lauderdale CF opened the scoring just 90 seconds into the match, polishing off a beautiful team move. Acosta then got on the scoresheet himself just after halftime, cleverly picking his spot with a low drive from the edge of the penalty area. He rounded off a fantastic performance by setting up Venton Evans for the team’s fifth goal.

After picking up a shutout win over the New England Revolution II in midweek and earning a tough 1-1 draw away to Greenville Triumph SC on Sunday, Union Omaha leads all clubs with four players selected to the Team of the Week. 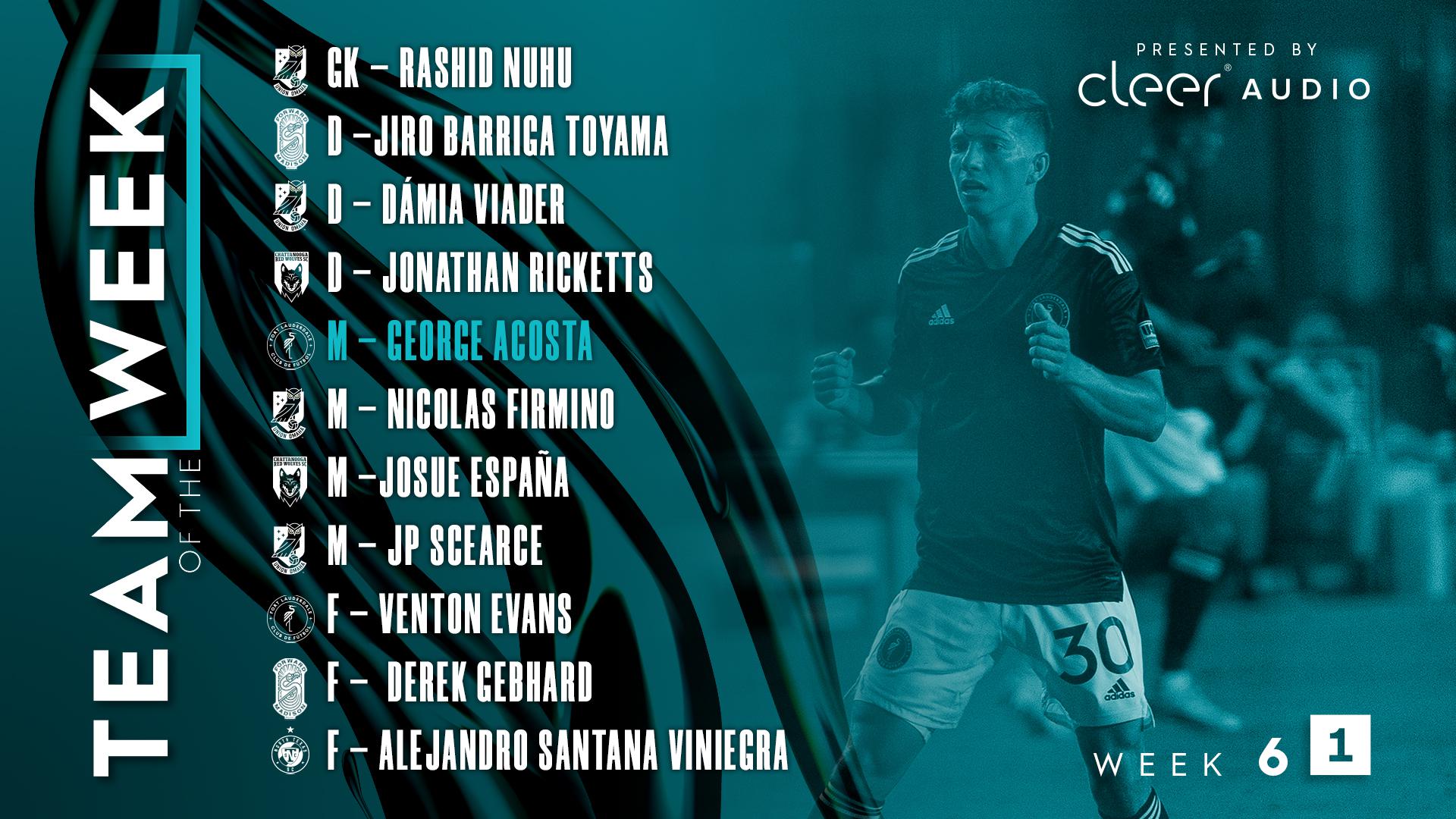 GK - Rashid Nuhu, Union Omaha: Nuhu kept a clean sheet in Omaha’s midweek win, and picked up the assist for his quality long-range ball to set up Greg Hurst for the game-winning goal. Against Greenville on Sunday, he made two saves, one of which was an incredible effort just after halftime to keep his side in the match.

D - Jiro Barriga Toyama, Forward Madison FC: Toyama was everywhere up-and-down the left flank for Madison on Saturday night. He played a role in the Flamingos’ clean sheet with four duels won and four interceptions, while getting forward to create two chances and passing at an 85 percent success rate.

D - Dámia Viader, Union Omaha: Week 5’s Player of the Week was back at it again in Week 6. Viader led all players in Omaha’s win over New England in duels won and chances created, and was the most accurate passer to play 45 minutes or more against Greenville, completing 91 percent of his attempts while winning six more duels and creating two chances.

D - Jonathan Ricketts, Chattanooga Red Wolves SC: Ricketts picked up the assist on both Chattanooga goals. He created four chances in total, and won six duels as well to cap off a solid all-around performance.

M - George Acosta, Fort Lauderdale CF: Acosta was nothing short of brilliant in Fort Lauderdale’s 5-1 win over FC Tucson. In addition to his goal and two assists, he created eight chances and completed 94 percent of his passing attempts.

M - Nicolas Firmino, Union Omaha: Firmino’s fantastic equalizer against Greenville stole the show in League One’s first-ever match on national television, a terrific half-volley which caromed in off the post. In Omaha’s midweek win over the Revolution II, he led all players with four successful tackles and won nine duels.

M - Josue España, Chattanooga Red Wolves SC: España scored both of Chattanooga’s goals as the team came from two behind to earn a point on the road against the Revolution II on Sunday night.

M - JP Scearce, Union Omaha: A second consecutive Team of the Week appearance for Scearce is the result of two more solid midfield displays for the 23 year old. He led all players in duels won in both of Omaha’s matches last week, with 11 against New England and 10 against Greenville. In the top-of-the-table clash with Triumph SC, he created two chances and had the most tackles of any player with four.

F - Venton Evans, Fort Lauderdale CF: Evans rounded off a dominant Fort Lauderdale performance with two well-placed finishes, putting the result beyond doubt just after Tucson had pulled a goal back late in the second half.

F - Derek Gebhard, Forward Madison FC: Gebhard was the hero of Forward Madison’s return to Breese Stevens Field, scoring a dramatic game-winning goal in the 90th minute. Before that, he won the most duels of any player in the match with 10, and drew four fouls.

F - Alejandro Santana Viniegra, North Texas SC: Santana Viniegra scored North Texas’ equalizer against Tormenta FC, and was the most accurate passer in the match to play 45 minutes or more with a 92 percent success rate. He also created two chances.