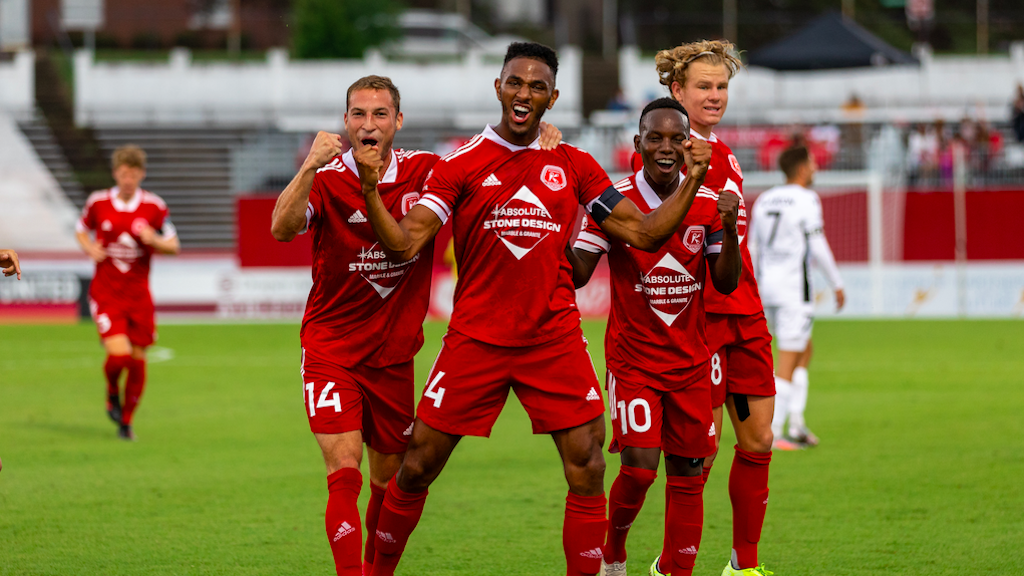 Richmond were last season's biggest improvers in terms of table position, rising from ninth in 2019 to fourth in 2020 / Photo courtesy Jessica Stone Hendricks

The Kickers were the second-best team in League One behind Greenville for most of the 2020 season, but faltered down the stretch, losing four of their final six games. However, last year’s campaign still represented a big step in the right direction for Richmond, who improved upon a ninth-place finish in 2019 to come fourth in their first campaign under Head Coach Darren Sawatzky.

Argentine striker Emiliano Terzaghi was a key contributor to the River City side, scoring 10 goals on his way to picking up the league’s MVP and Golden Boot honors. During the offseason, the Kickers added two more Argentines in Hernan Gonzalez and Zaca Moran. The club built out its depth chart with proven League One players at just about every position: goalkeeper Austin Aviza and defender Juan Pablo Monticelli from Orlando City B, defender Esteban Calvo from FC Tucson, and midfielder Nil Vinyals from Tormenta FC are just a few of many new faces at City Stadium this season.

Besides Terzaghi, multiple Richmond mainstays remained with the team. Ian Antley, Ivan Magalhaes, Luke Pavone, and goalkeeper Akira Fitzgerald return to the defensive unit, Matt Bolduc and Victor Falck will once again feature in midfield, and St. Vincent and the Grenadines striker Oalex Anderson is back for his first full season with the Kickers along with young attacking options Stanley Alves and Jonathan Bolanos. After the disappointment of coming up short last season, this is a hungry group aiming at postseason success.

League One’s reigning MVP and Golden Boot winner, Terzaghi was the league’s most prolific scorer last season. He recorded 10 goals in 15 appearances, and the Argentine is back for more in 2021. A highly-skilled finisher, Terzaghi possesses a striker’s instinct in the box. With the addition of other talented attacking pieces around him this offseason, defenses may not be able to key on him as much in 2021 as they did in 2020, giving him more room to operate in dangerous areas.

With Antley on the field in 2020, Richmond conceded nine goals in nine games and kept three clean sheets. When he was sidelined through injury, the Kickers conceded 13 goals in seven games and failed to keep a single clean sheet. The team has plenty of other talented players in defense, but Antley is one of their keys to success. A strong and quick fullback, Antley will be instrumental to Darren Sawatzky’s plans in his second season in the River City.

Sawatzky has been a fixture of American soccer for over two decades as both a player and a coach, and after taking charge of FC Tucson during League One’s inaugural season, he led the Richmond Kickers to a remarkable improvement in 2020. This offseason, he spearheaded a strategy which saw Richmond make a wide variety of quality additions all over the field, and should have no trouble motivating a team which fell just short last year but returns with serious League One title ambitions.

10 The number of new faces (so far) on the roster at City Stadium this year. The Kickers have had one of the league’s most interesting offseasons, adding talent from within and outside of League One. Mix those players with a strong existing squad, and this team looks dangerous - that is, of course, if they can jell quickly and effectively.