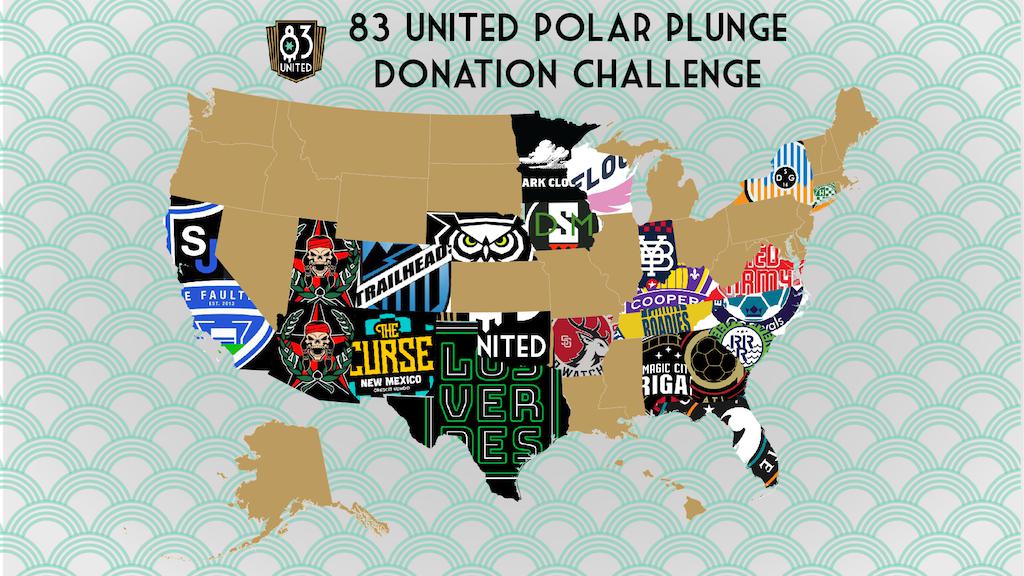 A map of supporters groups that have participated in the 83 United Polar Plunge Donation Challenge thus far.

TULSA, Okla. – Earlier this month, FC Tulsa supporters club 83 United began collecting donations for its third year of participation in the Oklahoma Special Olympics’ Polar Plunge, an event that since 2001 has raised money for the state-wide program.

Since then, their fellow supporters’ groups around the USL Championship and League One have stepped up to the mark, filling a state map with their respective colors after making donations that have pushed 83 United to the brink of its $7,000 goal.

It’s the sort of boost that group President Dennis Lane had hoped for when this year’s initiative began.

“Going into our third year of doing the plunge our goal was not only to raise more money than last year but also to get more participation,” Lane told FCTulsa.com on Feb. 6. “Having different members from the sports community has been huge, and it really shows how Tulsans can pull together for a good cause.  We also have been excited about the support from the soccer community outside of Tulsa, with four other supporters’ groups helping us spread the word.”

The support has come from all over the map, with members from The Curse from the Championship’s New Mexico United and the Omaha Parliament from League One’s Union Omaha both jumping on board early. Now, the map includes representation from almost half the states after donations from the Richmond Kickers’ Red Army and the Brickyard Battalion from Indy Eleven on Sunday.

This year’s Polar Plunge is scheduled to take place on Saturday, February 27 at Safari Joe’s, with the overall goal across the 18 organizations set to take part to raise at least $50,000. United 83 currently leads the race to provide the largest individual donation for a cause that is very close to Lane’s heart.

“This cause is special to me because I have seen first-hand what special Olympics can do,” Lane said. “Not only to let people with all abilities to be able to compete and participate but make friends as well.  My son who has Down Syndrome has competed over the years in soccer, bowling, bocce and track.  Getting to hang with friends and mentors was one of the greatest bonuses that the Special Olympics provided that he may not have experienced without it.”

Fans looking to make donations can visit United 83’s Pledge Page, and follow the group on Twitter for regular updates.