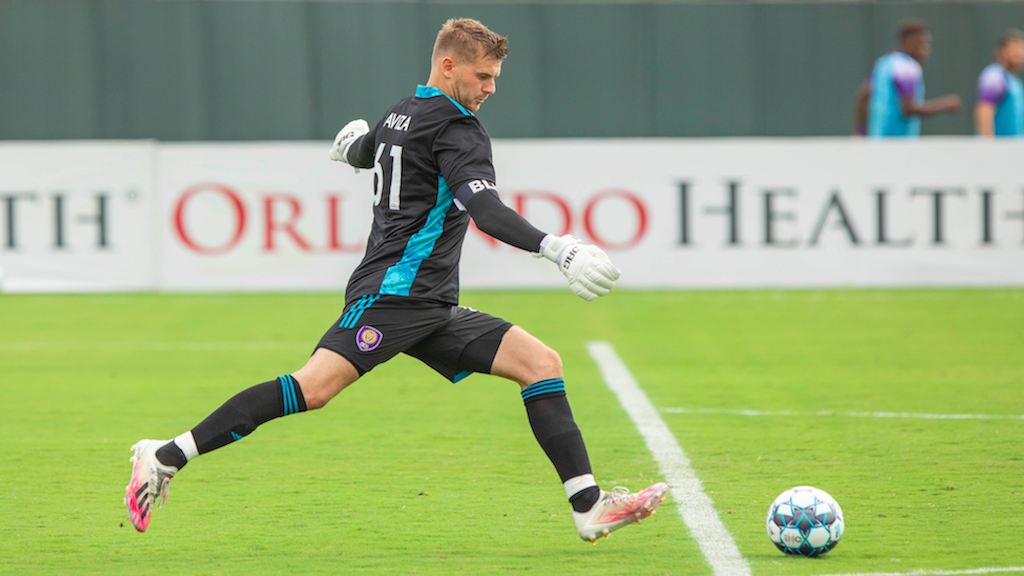 A talented young prospect at the goalkeeper position, Aviza finished joint-top of League One in saves last year with 50, level with now-teammate Akira Fitzgerald / Photo courtesy Mark Thor and Orlando City B

RICHMOND, Va. – The Richmond Kickers announced Monday that the club has signed goalkeeper Austin Aviza for the 2021 USL League One season, pending league and federation approval.

“Austin is a young goalkeeper with a huge upside,” said Darren Sawatzky, Richmond Kickers Chief Sporting Officer and Head Coach. “We liked his progression in 2020 and we see him playing games for us in Richmond as he continues to grow as the backspot for our club. It is always a great position to be in when you have two goalkeepers on your roster that have started consistently at the professional level. Austin's character and work ethic made him a great choice for us and we look forward to getting him in the locker room."

Selected 44th overall in the 2020 MLS SuperDraft by Orlando City, Aviza spent his first professional season with in League One last year with Orlando City B. Immediately making his presence known around the league, the Medway, Mass. native led USL League One in saves made (50), sharing the top spot with his new Kickers teammate Akira Fitzgerald. With an excellent 89% pass completion rate in his first year as a pro, Aviza adds quality to the team both on and off the ball.

“Darren was clear with me that the goal every year is to win the championship and develop his team where every player is consistently and fully playing to their maximum potential,” Aviza said. “His energy and commitment to the program caught my attention straight away. His eagerness to have me join the team was contagious as I always want to be a part of a culture where the staff and players are like-minded in the drive for success and to always get better.

"As a goalkeeper, I found it super attractive to have the opportunity to work with Akira, who has a ton of experience playing professionally. I really felt that I can learn a tremendous amount from him. I am also aware of the rich history of this club and the fan base is one of the best in the country. I look forward to representing Richmond and giving back to the community.”

Aviza played most of his youth career with the New England Revolution academy, and also earned a few call-ups to the United States U-17 and U-18 national teams. Having a strong pedigree in the American youth system, Aviza is excited to continue his development in a culture centered around growth through success.

“My primary goal for myself is to contribute in whatever ways I can and whenever I can to help the team win the championship,” said Aviza. “My expectation is that the entire staff and all of my teammates will have that same mindset which I am confident they do. I know that I need to prove myself here and am committed to putting in the work every single day to continue to improve to be the best player that I can possibly be.”