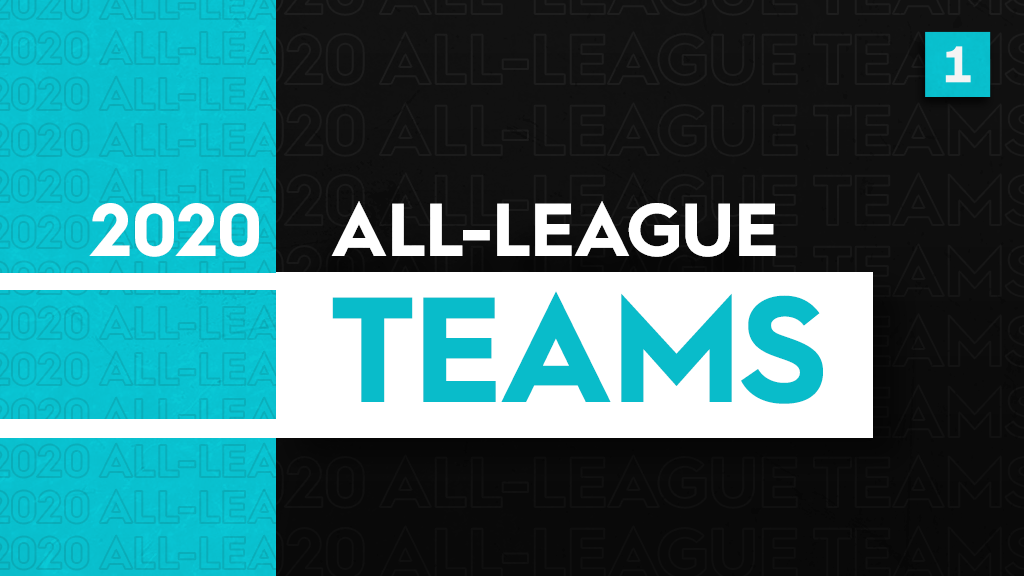 TAMPA, Fla. – USL League One honored standout performers from its second season on Wednesday as it unveiled the 2020 USL League One All-League Teams. Greenville Triumph SC led all teams with six selections after claiming the 2020 League One Title, while first-year club Union Omaha earned four selections.

The 2020 USL League One All-League Teams were voted on by team technical staffs and executives.

Richmond Kickers forward Emiliano Terzaghi earned the lone All-League honor for his side after scoring 10 goals and capturing the Golden Boot award in his first season in League One. 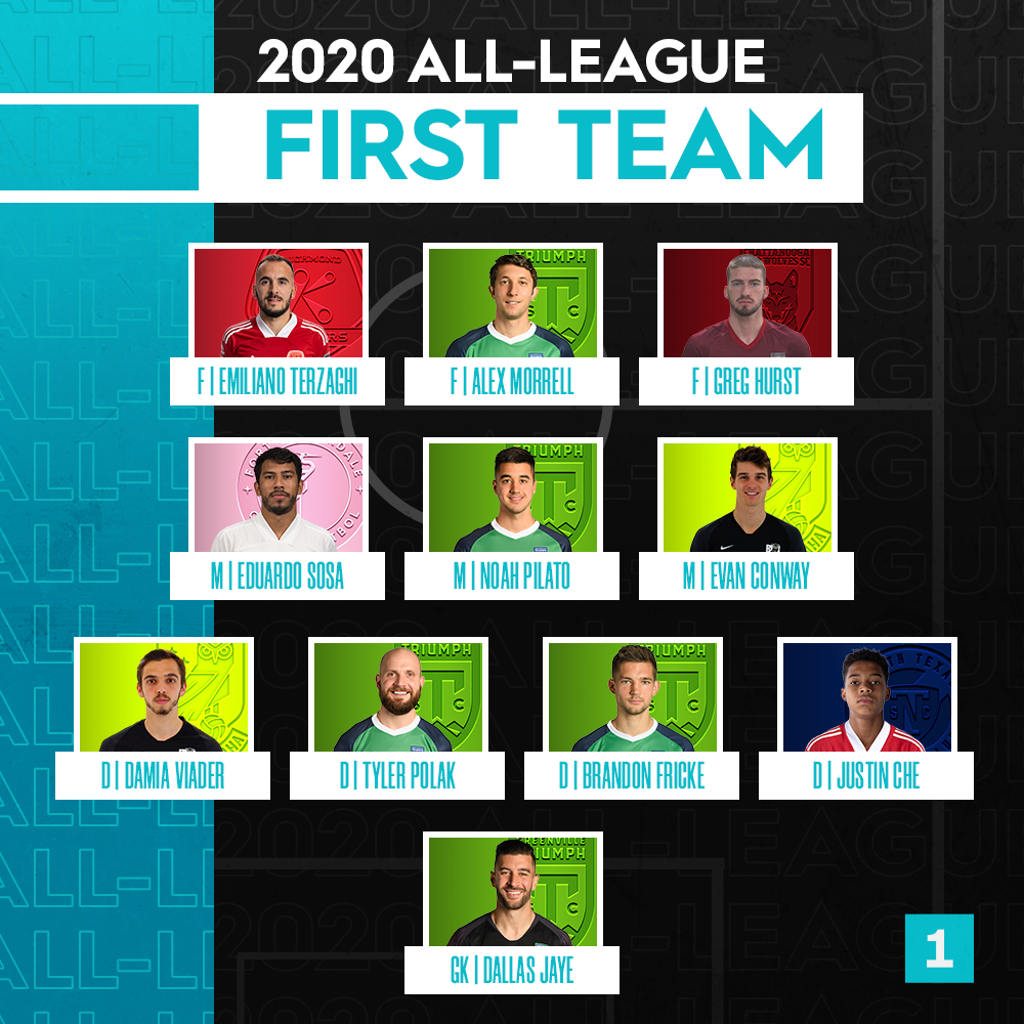 GK – Dallas Jaye, Greenville Triumph SC: Jaye led League One with nine shutouts and a 0.69 goals-against average as he recorded 32 saves in 16 appearances with a save percentage of 72.4 percent.

D – Brandon Fricke, Greenville Triumph SC: Fricke was an integral piece of the league’s best defense and led League One with 17 blocks while making 60 recoveries and winning 56 duels.

D – Tyler Polak, Greenville Triumph SC: Polak led the league with 41 interceptions and led all outfield players in recoveries with 115. The left back also ranked in the top five among defenders in chances created (20) and tackles won (21 at a success rate of 56.8 percent) as part of Greenville’s league-best defense.

M – Eduardo Sosa, Fort Lauderdale CF: Sosa finished tied for second in the league in dribbles completed with 27, scored three goals and tallied a team-high four assists and had a shooting accuracy rate of 50 percent as he proved the biggest attacking threat for his side during the season.

F – Greg Hurst, Chattanooga Red Wolves SC: Hurst finished as runner-up in the Golden Boot race with eight goals, tallied two assists, and had the best goals-per-game average (0.79 GPG) of any player who played at least half of his team’s minutes.

F – Emiliano Terzaghi, Richmond Kickers: Terzaghi was the only player to hit double-digit goals, notching 10 on his way to capturing the Golden Boot while recording 39 shots and also winning 55.1 percent of his duels (92 of 167) during the regular season. 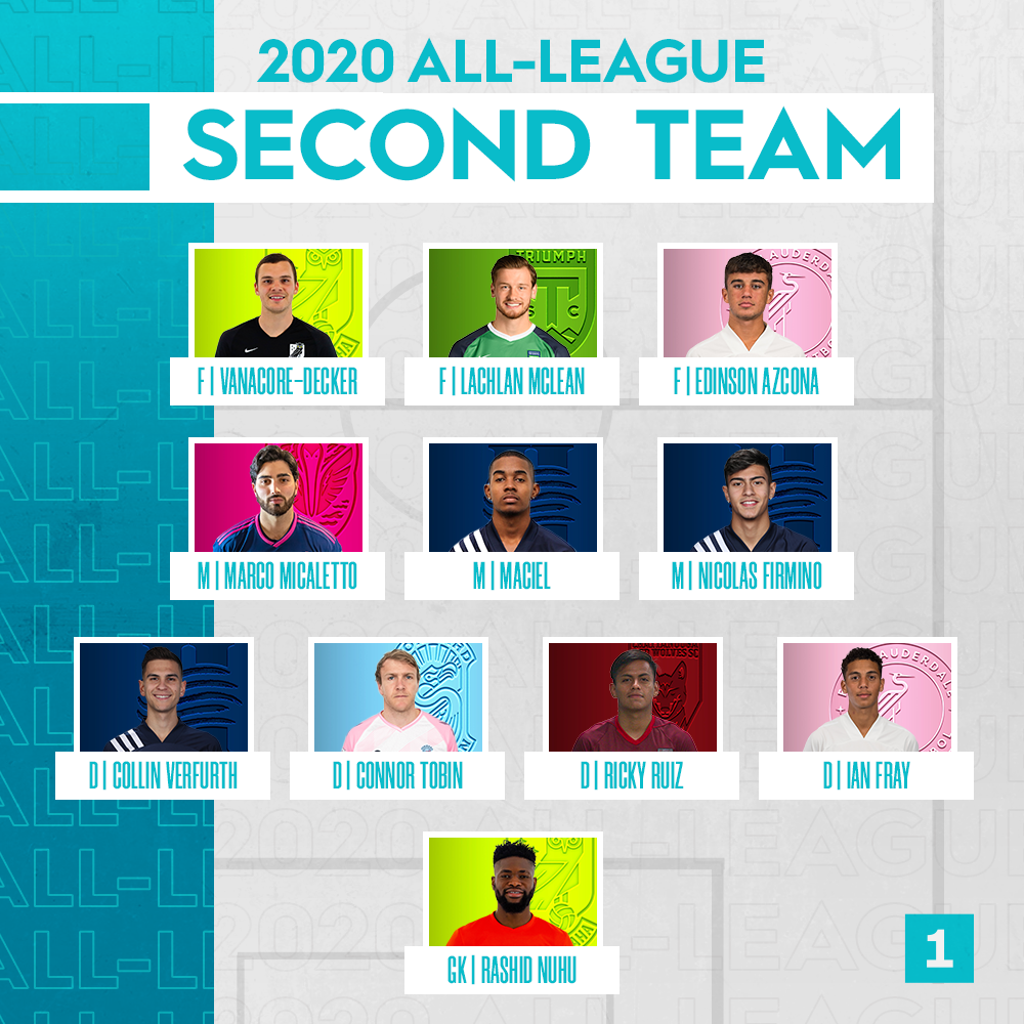 GK – Rashid Nuhu, Union Omaha: Nuhu recorded the second-most clean sheets in the league with six, made 32 saves and finished as runner up in the Golden Glove race with a 0.96 goals-against average.

D – Ricky Ruiz, Chattanooga Red Wolves SC: Ruiz won 107 of 169 duels - tied for most in the league - and made the second-most interceptions in the league with 38, while making 19 key passes and tallying two assists.

D – Connor Tobin, Forward Madison FC: Tobin blocked a team-high eight shots and made the sixth-most clearances in the league with 61, and was only topped by Fray in duel success among those with at least 50 duels won, winning 73.1 percent (57 of 78).

M – Maciel, New England Revolution II: Maciel completed the second-highest number of passes in the league with 722 while maintaining an 87.1 percent passing accuracy rate and finished in the top ten among all players in recoveries with 110 and interceptions with 33.

F – Lachlan McLean, Greenville Triumph SC: McLean finished third in the Golden Boot race with seven goals, averaging 0.74 goals per game on a shot conversion rate of 24.1 percent. The Australian striker also finished in the top ten among all players in duels won with 116.

F – Ethan Vanacore-Decker: Vanacore-Decker tallied a league-high six assists, finished in the top five among all players in chances created with 28, and scored three goals while finishing tied for second in League One with 46 shots overall.