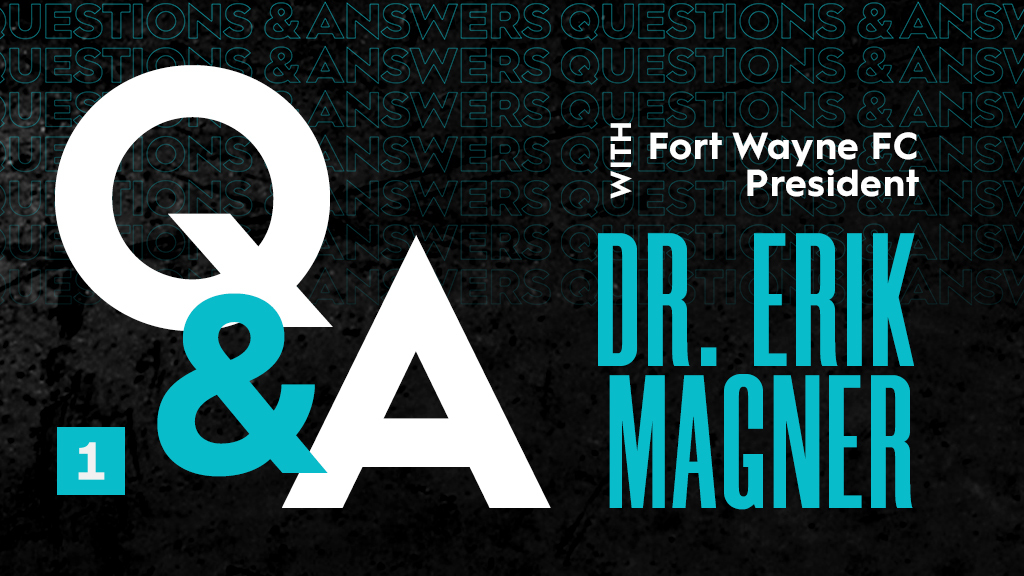 USL's Cameron Koubek sat down to speak with Fort Wayne FC President Dr. Erik Magner. Below are excerpts of that interview, edited for brevity.

On Wednesday, Fort Wayne FC was announced as a new member of USL League Two. The club, whose leadership group involves President Dr. Erik Magner and former U.S. men's national team start DaMarcus Beasley, will play its first two seasons within the USL ecosystem in League Two before moving to League One as a professional club for the 2023 season.

Beasley will speak about his vision for the club with League One on Friday, via Instagram Live from the site of the League One Final. Dr. Magner sat down ahead of the announcement to share his thoughts on the future of soccer in Fort Wayne.

CK: Nice to meet you Dr. Magner, and let me be one of the first to congratulate you on Fort Wayne FC joining the USL. Very exciting times ahead for the club and for soccer in Fort Wayne!

EM: Absolutely! We’re really looking forward to building something in Fort Wayne that people can be proud of, first at the League Two level and later as a full-time professional club in League One in 2023.

CK: Let’s jump right in. What do you think makes Fort Wayne a great place for a pro soccer team?

EM: Since I moved to Indiana what I’ve quickly noticed is Indiana really has some of the best soccer in the United States. We have two of the best college programs in Indiana University and Notre Dame playing soccer at a high level. We had planned to play this season, and on our roster of 36 players we had nine local players. We were considered one of the top teams at our level, not having played a single game yet. There’s tremendous talent here. I’m still an active player and the staff at the club understands soccer. There will be very talented players from Fort Wayne joining our team, I’m sure of it and so I’m excited about it.

CK: Fort Wayne FC is following in the footsteps of clubs like FC Tucson and South Georgia Tormenta FC, which began as League Two clubs before forming professional teams at the League One level. When looking at this next step in the evolution of FWFC, what made starting in League Two such an attractive option in building toward the ultimate goal of becoming a professional League one club?

EM: I think Fort Wayne FC will be a blueprint. It will show that pathway to professional soccer will go through USL League Two. There’s a lot of teams now in League Two, with more and more joining. Cities that have over 100,000 people that are able to join League One down the road, but they need the experience first. Allowing for two or maybe three years in League Two before advancing to a full professional level, I think it’s ideal. It helps you to set up your operational team, it helps you to build your fanbase, it gives you two years to do all those things right. If you feel comfortable doing all that, then you can play professional soccer. It will allow you to provide soccer from March to the end of October, so I believe Fort Wayne FC will be the blueprint in how to do this.

CK: There’s a two-and-a-half year runway between now and when Fort Wayne FC will first kick a ball as a professional club in League One. What do some of your key strategic goals look like during that time?

EM: A stadium is number one, of course. We’re working closely with the city to prepare us to play in a suitable stadium. But also on the operational level, the scouting needs to be correct. It’s important to bring very good players to Fort Wayne. On the other side, coaching is important to help local talent develop and play at the professional level. We’re looking at the fan experience at the games and at the stadium, it is important to build a fanbase. There are so many things that are going on that need to be done right. I’m actually glad that we have a large number of people supporting us in our goals to showcase professional soccer here in Fort Wayne.

CK: That’s all the questions I have. Congrats again on joining the league, and looking forward to seeing Fort Wayne FC take the field in League Two next year. Appreciate your time!

EM: No problem! I’m excited as well for this next step in the growth of the club.