TAMPA, Fla. – USL League One announced the Team of the Week Presented by Cleer Audio for Week 15 of the 2020 regular season on Tuesday, with Greenville Triumph SC’s Alex Morrell earning Player of the Week honors after leading his side to a season-ending victory against Orlando City B that primed the side for this Friday night’s League One Final.

Morrell recorded a pair of goals in the first half to set Greenville on the road to a 4-1 victory in Orlando and then played a role in Triumph SC’s two second-half goals while completing 36 of 42 passes overall and two key passes.

Morrell and his teammates will look to carry the momentum of their victory into Friday night’s clash with Union Omaha in the 2020 League One Final at Legacy Early College as the league crowns the second champion in its young history. 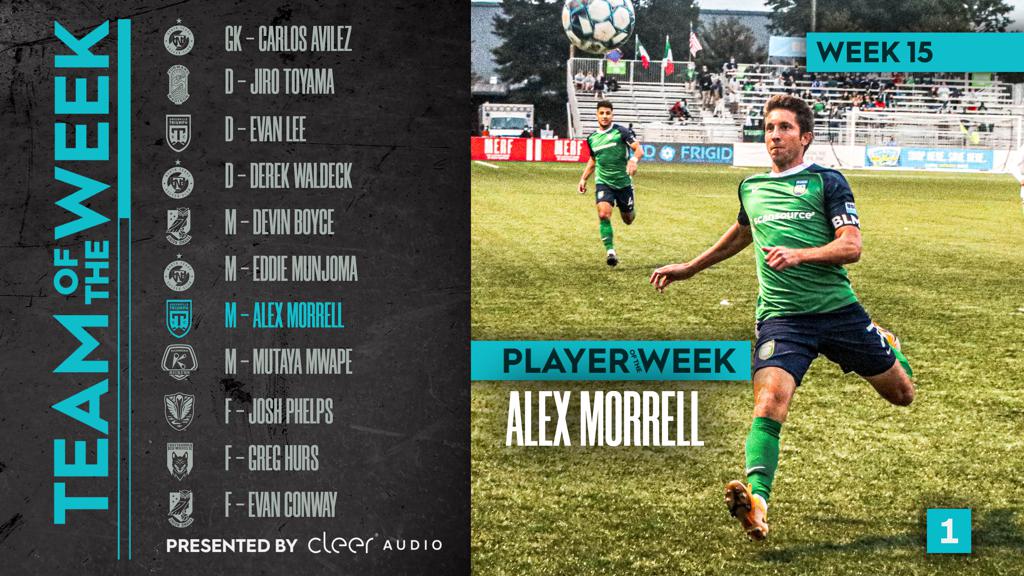 GK – Carlos Avilez, North Texas SC: Avilez recorded six saves across two outings, including a key five-save shutout against Forward Madison FC on Wednesday night that helped the side earn a 1-0 win to remain in contention for the League One Final until the final day of the regular season.

D – Jiro Toyama, Forward Madison FC: Toyama scored the game-winning goal in the 83rd minute as the Flamingos rallied for a 2-1 victory against the New England Revolution II on Saturday night and also completed 32 of 37 passes and made three interceptions and seven recoveries.

D – Evan Lee, Greenville Triumph SC: Lee recorded one assist, completed 25 of 30 passes overall and was solid on the Triumph SC back line winning 2 of 2 tackles and making two clearances in Greenville’s win against Orlando.

M – Alex Morrell, Greenville Triumph SC: Morrell scored twice in the first half, had three shots on target and two key passes while completing 36 of 42 passes overall in Greenville’s 4-1 win against Orlando City B.

M – Mutaya Mwape, Richmond Kickers: Mwape scored once and recorded three shots while completing 12 of 14 passes and winning 6 of 10 duels in the Kickers’ 3-1 victory against Orlando City B last Wednesday afternoon.

F – Greg Hurst, Chattanooga Red Wolves SC: Hurst scored the opening goal in the Red Wolves’ 2-1 victory against the Richmond Kickers on Saturday night and finished the game with seven shots overall and four on target for the visitors at City Stadium.

F – Evan Conway, Union Omaha: Conway scored the decisive goal in the 91st minute to lift Omaha to a 1-0 victory against Fort Lauderdale on Saturday night that put Los Buhos into this Friday’s League One Final.