USL League One Team of the Week - Week 14

TAMPA, Fla. - USL League One announced the Team of the Week Presented by Cleer Audio for Week 14 of the 2020 regular season on Tuesday, with FC Tucson forward Josh Coan named Player of the Week for scoring both of his team’s goals in a 2-0 win over Orlando City B on Saturday night at Kino North Stadium.

The 22-year-old Coan scored at the tail end of both halves as Tucson finished its 2020 season on a high note. The brace brought him level with Shak Adams as the club’s leading scorers for the year with four goals each.

Following Union Omaha’s crucial 2-1 win over Greenville Triumph SC on Sunday, the Owls lead all teams with four players represented in the Team of the Week. 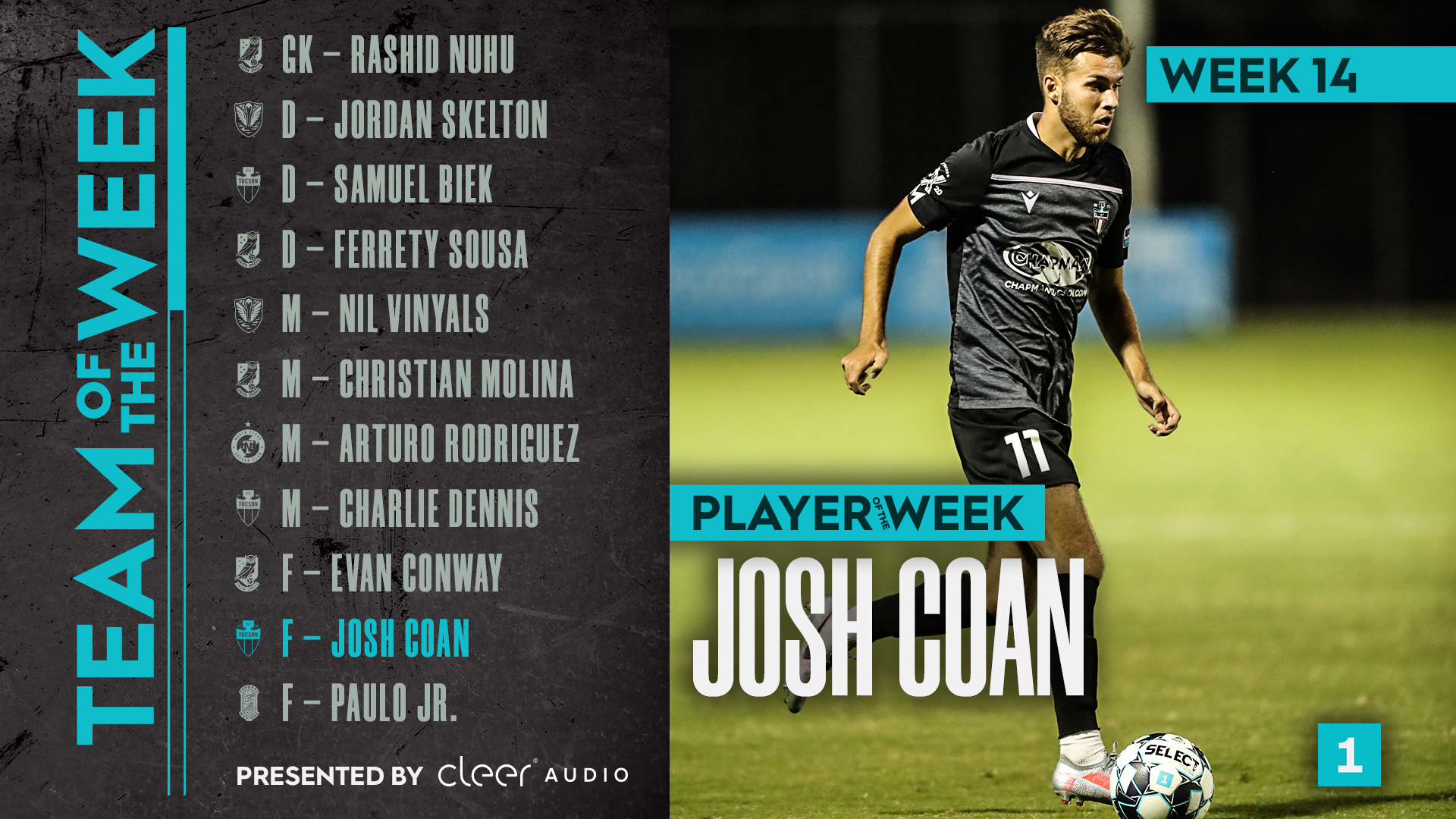 GK - Rashid Nuhu, Union Omaha: Nuhu made four saves to preserve a vital result for Omaha, including a spectacular denial in stoppage time which allowed Los Buhos to hand Triumph SC its first home defeat of the season.

D - Jordan Skelton, South Georgia Tormenta FC: Skelton was the anchor of a Tormenta defense which shut down Golden Boot leader Emiliano Terzaghi and the Richmond Kickers on Saturday. In South Georgia’s shutout win, Skelton won 6 of 7 duels, 4 of 5 aerial duels, made five clearances and completed 38 of 49 passes.

D - Samuel Biek, FC Tucson: Biek was everywhere for Tucson on Saturday, an instrumental part of the team’s clean sheet against Orlando. He won a game-high three tackles, won 8 of 12 duels, made four interceptions and completed 53 of 59 passes.

D - Ferrety Sousa, Union Omaha: Sousa got forward well to aid in Omaha’s attacking efforts, creating the most chances of any player in the game with four in his side’s victory against Greenville. He tacked on four clearances and two tackles as well for an effective all-around performance.

M - Nil Vinyals, South Georgia Tormenta FC: Vinyals’ vision created the lone goal in Tormenta’s 1-0 victory against Richmond, with the Spaniard picking up credit for the assist to Marco Micaletto. His distribution was excellent for the entirety of the 90 minutes, as he completed 91 percent of his passes.

M - Christian Molina, Union Omaha: Molina scored a fantastic goal to get Omaha going on Sunday, driving down the left flank with the ball before cutting inside on his right foot and firing an unstoppable shot into the top corner from outside the box.

M - Arturo Rodriguez, North Texas SC: The reigning MVP continued his string of impressive performances, recording an assist in his team’s 1-1 draw with New England Revolution II. He again made his team tick when on the ball, creating seven chances and completing 41 of 45 passes overall.

F - Evan Conway, Union Omaha: Conway has been the most consistent offensive presence on an Omaha team that has struggled to score at times this season, and he was the driving force behind the Owls’ big result over Greenville with a spectacular game-winning goal and an assist to boot.

F - Josh Coan, FC Tucson: Coan scored in first-half stoppage time and in the 90th minute to propel Tucson past Orlando City B on Saturday, an excellent end to what has been a strong second half of the season for the young striker.

F - Paulo Jr., Forward Madison FC: The Brazilian was the key piece in Madison’s attack for both Flamingos’ matches, scoring once and assisting another. He passed at an 88 percent success rate over the course of both games, and created a match-leading five chances against Chattanooga Red Wolves SC.