USL League One Team of the Week – Week 13

TAMPA, Fla. – USL League One announced the Team of the Week Presented by Cleer Audio for Week 13 of the 2020 regular season on Tuesday, with the New England Revolution II’s Nicolas Firmino earning Player of the Week honors after leading his side to a fourth consecutive victory on Friday night as the Revolution II downed Fort Lauderdale CF.

Firmino recorded one goal and one assist and had three shots and two key passes overall in New England’s 4-1 victory at Gillette Stadium. Additionally, the midfielder completed 50 of 60 passes overall and made nine recoveries and five interceptions to move the Revolution II within six points of the top two positions in the League One standings. 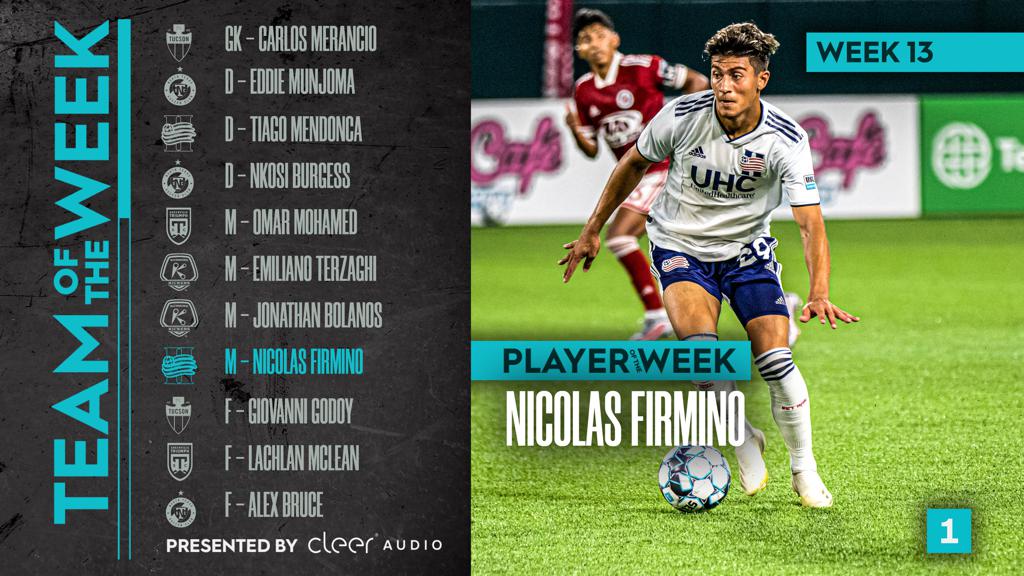 D – Eddie Munjoma, North Texas SC: Munjoma found the net in NTSC’s victory against the Richmond Kickers on Saturday night and completed 56 of 64 passes across the side’s two wins on the week overall.

D – Tiago Mendonca, New England Revolution II: Mendonca scored the final goal for the Revolution II to cap a performance that saw him record 13 clearances, win 4 of 5 duels and make seven recoveries in a 4-1 win against Fort Lauderdale CF.

D – Nkosi Burgess, North Texas SC: Burgess scored the game-winner as North Texas rallied for a 3-1 victory on the road against Chattanooga Red Wolves SC and over two victories on the week completed 101 of 121 passes and won 9 of 14 duels.

M – Emiliano Terzaghi, Richmond Kickers: Terzaghi found the net for the 10th time this season in the Kickers’ clash with North Texas SC and was sharp with the ball at his feet in both of the club’s outings on the week, completing 30 of 35 passes overall.

M – Jonathan Bolanos, Richmond Kickers: Bolanos scored both goals as the Kickers took a 2-1 victory against Orlando City B last Wednesday night and completed 16 of 24 passes while winning 7 of 9 duels in midfield.

F – Lachlan McLean, Greenville Triumph SC: McLean continued his solid season with two goals for Triumph SC, with the second coming in stoppage time to earn the visitors a 2-2 draw with FC Tucson on Saturday night.