USL League One Team of the Week – Week 12

TAMPA, Fla. - USL League One announced the Team of the Week Presented by Cleer Audio for Week 12 of the 2020 regular season on Tuesday, with North Texas SC forward Ronaldo Damus claiming the Player of the Week mantle after leading his side to a 3-0 win over Fort Lauderdale CF.

The Haitian international scored two goals and added an assist as North Texas cruised to a critical victory, keeping the team’s hopes of reaching a second-straight League One Final alive. The league’s reigning Golden Boot winner, Damus’ excellent performance brings his tally on the year to five goals and three assists. 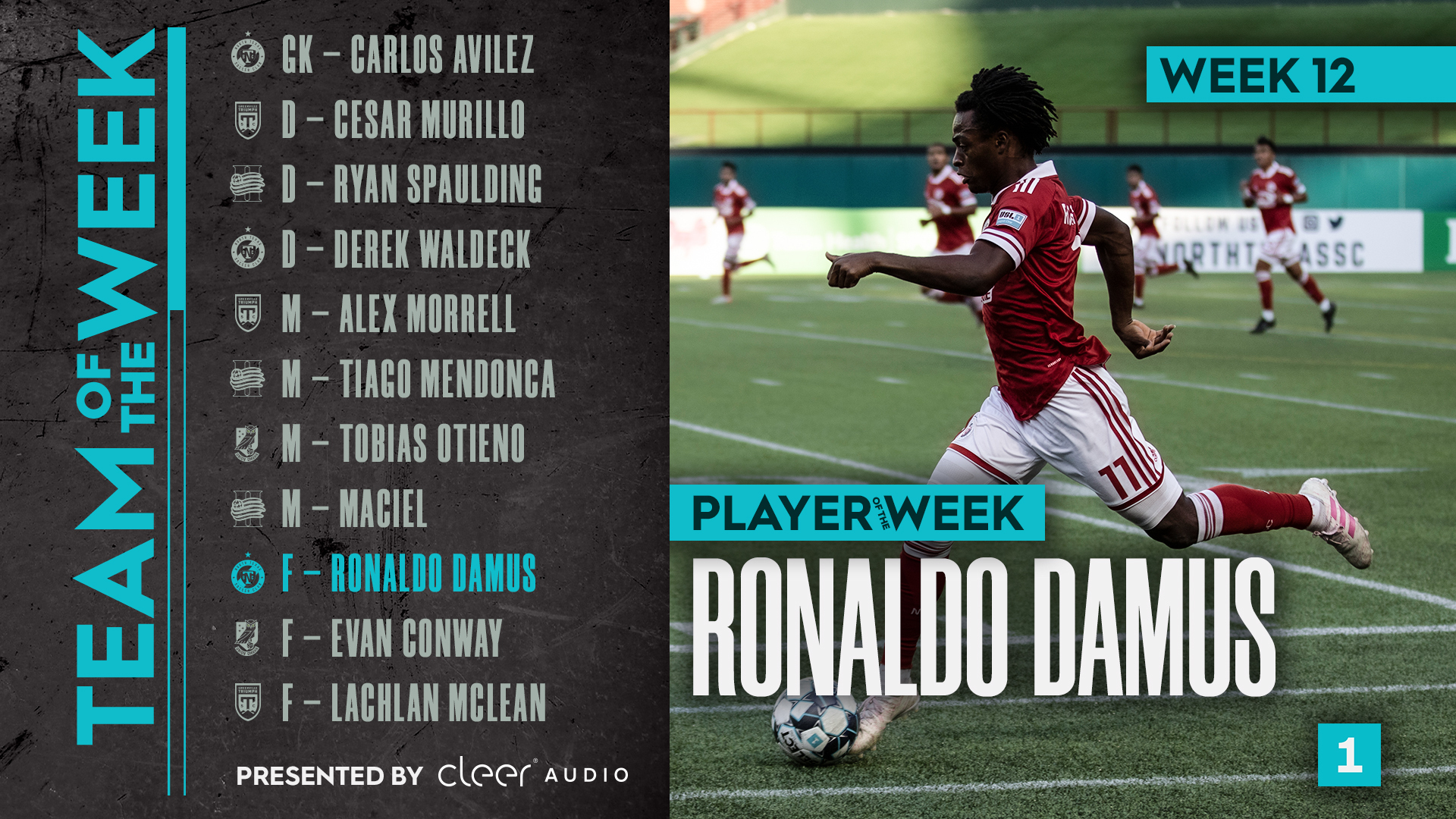 GK - Carlos Avilez, North Texas SC: Avilez made five saves to preserve a clean sheet for North Texas, including a fine stop at his near post to deny Fort Lauderdale what would have been the go-ahead goal early in the second half.

D - Cesar Murillo, Greenville Triumph SC: In Triumph SC’s eighth shutout win of the season, Murillo led all players in successful tackles with three. He completed 75 percent of his passes, including 14 in the opposition half, won four duels and made three clearances.

D - Ryan Spaulding, New England Revolution II: Spaulding was instrumental in New England’s shock 4-0 win over the Richmond Kickers, winning more duels than anyone else on the pitch with seven. He also made nine interceptions and nine recoveries.

D - Derek Waldeck, North Texas SC: Waldeck’s distribution was on display on Saturday, as he recorded an assist and completed 48 of 53 passes while helping his side keep a clean sheet.

M - Alex Morrell, Greenville Triumph SC: Morrell did a little bit of everything to push Greenville to an important win over Orlando City B. He assisted Triumph SC’s opening goal, then doubled the lead with a strike of his own. Morrell also created nine chances and completed four dribbles.

M - Tiago Mendonca, New England Revolution II: Mendonca did yeoman’s work in the New England midfield, leading the team to a third-consecutive shutout win. He made a team-high five clearances and gained possession 12 times, while recording four tackles, six interceptions and a blocked shot. With the ball at his feet, he completed 36 of 43 passes.

M - Tobias Otieno, Union Omaha: The Owls’ brand-new signing hit the ground running in his first two matches with Omaha. On his debut against Fort Lauderdale, he led all players in tackles (five) and duels won (10). Otieno followed that up with an assist in Omaha’s 3-0 win over Tormenta FC at the weekend, completing 25 of 29 passes and winning eight more duels.

M - Maciel, New England Revolution II: The Brazilian was stellar at both ends of the pitch in New England’s win over Richmond, completing a team-high 37 passes at a 90 percent accuracy rate. One of those was a key pass, and defensively the 20-year-old won two tackles and made five interceptions.

F - Ronaldo Damus, North Texas SC: Damus’ dominance is nothing new to anyone who watched him play in 2019, and he was back with more of the same on Saturday. He played a role in all three of North Texas’ goals, scoring two and assisting the other.

F - Evan Conway, Union Omaha: Conway’s attacking play led Union Omaha to a pair of vital wins in the Owls’ hunt for second place. He grabbed a goal and an assist in a midweek victory over Fort Lauderdale, and opened the scoring in the 38th minute against Tormenta FC on Saturday.

F - Lachlan McLean, Greenville Triumph SC: The Australian striker produced the breakthrough moment in Greenville’s win over Orlando City B with a goal on 65 minutes. He made one key pass and won seven duels as well.