USL League One Team of the Week – Week 11

TAMPA, Fla. – USL League One announced the Team of the Week Presented by Cleer Audio for Week 11 of the 2020 regular season on Tuesday, with the Richmond Kickers’ Ivan Magalhaes earning Player of the Week honors after leading his side to a pair of victories on the week, including a key 1-0 victory at Union Omaha on Saturday night that moved the Kickers into second place in the League One standings.

The Brazilian defender scored the only goal for the Kickers as they claimed victory against Los Buhos at Werner Park and put in strong defensive work across both of the club’s outings, which also saw the Kickers take a 2-1 win against Fort Lauderdale CF. Magalhaes recorded seven interceptions, 11 clearances and 12 recoveries across the two games while completing 34 of 51 passes overall. 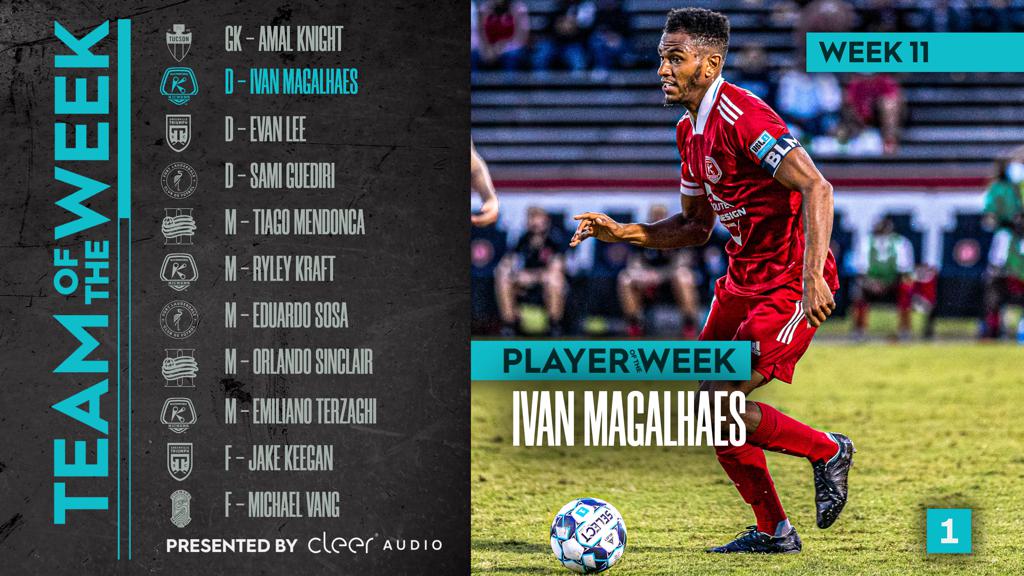 D – Ivan Magalhaes, Richmond Kickers: The Brazilian notched seven interceptions, 11 clearances and 12 recoveries across two victories for the Kickers in the week and scored the only goal in their 1-0 win against Union Omaha on Saturday night.

D – Evan Lee, Greenville Triumph SC: Lee won 6 of 8 duels, made two interceptions and completed 26 of 35 passes in a strong defensive performance by Triumph SC as the side took a 1-0 win against North Texas SC on Friday night.

D – Sami Guediri, Fort Lauderdale CF: Guediri was sharp on and off the ball in Fort Lauderdale’s two outings over the week, completing 72 of 79 passes and winning 12 of 16 duels while also recording four interceptions and 10 recoveries.

M – Eduardo Sosa, Fort Lauderdale CF: Sosa recorded a goal and assist in Fort Lauderdale’s 2-1 victory against FC Tucson on Saturday night and across two outings completed 43 of 54 passes and made five recoveries.

M – Orlando Sinclair, New England Revolution II: Sinclair set up the Revolution II’s winning goal against Orlando City B and was sharp on the ball otherwise, recording three key passes and 39 of 46 passes overall in the side’s second consecutive win.

M – Emiliano Terzaghi, Richmond Kickers: The Argentine continued his outstanding season with both the Kickers’ goals against Fort Lauderdale CF on Wednesday night and won 16 of 29 duels across both of the club’s victories in the week.