USL League One Team of the Week – Week 10

TAMPA, Fla. – USL League One announced the Team of the Week Presented by Cleer Audio for Week 10 of the 2020 regular season on Tuesday, with South Georgia Tormenta FC’s Curtis Thorn earning Player of the Week honors after leading his side to a 2-1 victory against Fort Lauderdale CF on Saturday night.

Thorn recorded a goal and assist and had two shots and three chances created in attack, while winning 6 of 9 duels and recording four clearances and two interceptions defensively. A recent addition to Tormenta FC’s squad, the 25-year-old had previously made 16 appearances for Tormenta FC 2 in USL League Two in addition to competing for Nova Southeastern collegiately. 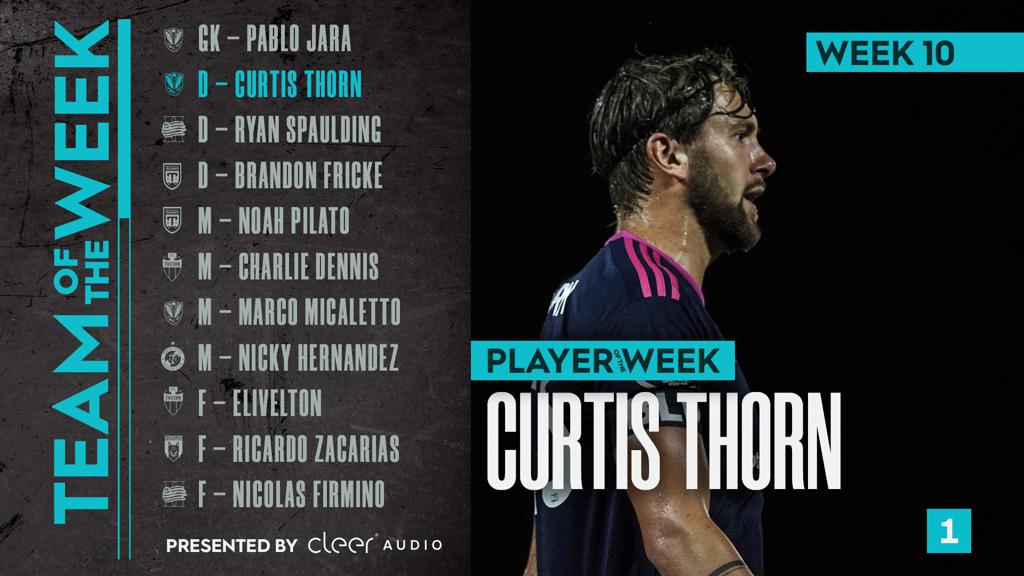 D – Curtis Thorn, South Georgia Tormenta FC: Thorn had one goal and one assist, completed 20 of 25 passes and had two shots and three chances created overall while winning six of nine duels defensively in Tormenta FC’s win at Fort Lauderdale.

F – Elivelton, FC Tucson: Elivelton found the net in both of Tucson’s contests over the week, and completed 69 of 78 passes and won 9 of 15 duels to help his side earn four points against the New England Revolution II and North Texas SC.

F – Ricardo Zacarias, Chattanooga Red Wolves SC: Zacarias had one goal, three shots on target and completed 17 of 20 passes as the Red Wolves took a 2-0 victory against Union Omaha on Tuesday to move into second place in the League One standings.

F – Nicolas Firmino, New England Revolution II: Firmino scored once, had one key pass and completed 30 of 47 passes overall while winning 13 of 20 duels and 2 of 3 tackles in the Revolution II’s victory against Union Omaha.