USL League One Team of the Week – Week 9

TAMPA, Fla. – USL League One announced the Team of the Week Presented by Cleer Audio for Week 9 of the 2020 regular season on Tuesday, with Fort Lauderdale CF’s Sami Guediri earning Player of the Week honors after playing a key role at both ends of the field in his side’s 2-0 victory against Orlando City B on Saturday night.

Guediri recorded one assist and four key passes and completed 2 of 2 dribbles in attack, but he was also a key cog in the host’s control over possession in the contest. The 23-year-old South Florida native completed 44 of 53 passes overall while winning 7 of 10 duels, 2 of 2 aerials, and 2 of 3 tackles while making five recoveries and two interceptions defensively. 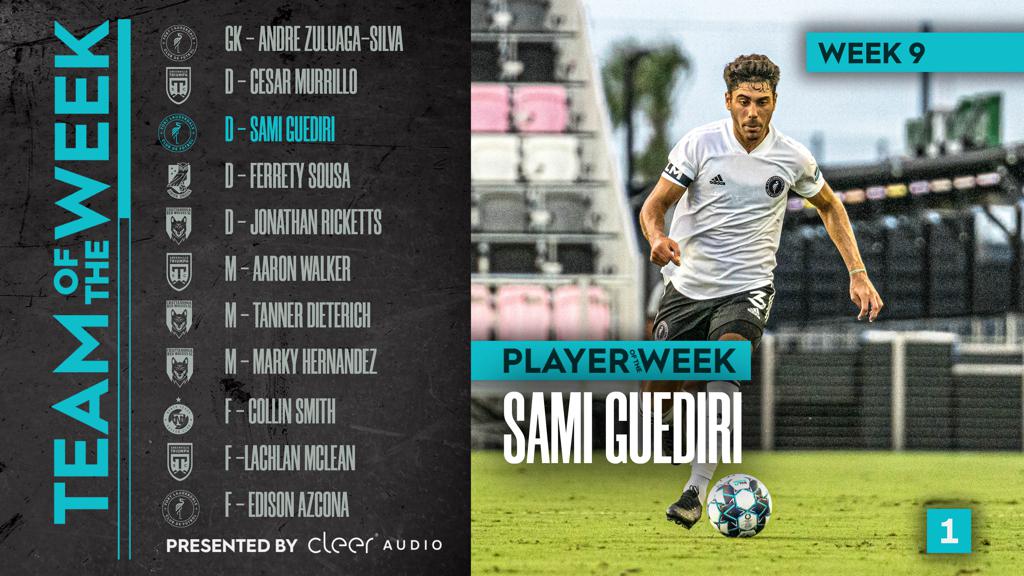 D – Sami Guediri, Fort Lauderdale CF: Guediri recorded one assist and four key passes, while completing 44 of 53 passes overall and winning 7 of 10 duels and 2 of 3 tackles in Fort Lauderdale’s 2-0 victory against Orlando.

D – Jonathan Ricketts, Chattanooga Red Wolves SC: Ricketts won 17 of 23 duels and 4 of 5 tackles while completing 60 of 83 passes across two games as the Red Wolves took victories against the New England Revolution II and Richmond Kickers.

F – Collin Smith, North Texas SC: Smith had one goal on three shots, completed 14 of 17 passes overall and won 5 of 9 duels to help lead North Texas to a 2-0 road victory against FC Tucson.

F – Edison Azcona, Fort Lauderdale CF: Azcona recorded a goal and assist, completed 37 of 41 passes overall and made eight recoveries to help lead his side to a 2-0 victory against Orlando City B.