USL League One Team of the Week – Week 8

TAMPA, Fla. – USL League One announced the Team of the Week Presented by Cleer Audio for Week 8 of the 2020 regular season on Tuesday, with Greenville Triumph SC’s Alex Morrell claiming Player of the Week honors for the second time this season after he led his side to a 2-1 victory against South Georgia Tormenta FC on Friday night at Erk Russell Park.

Morrell notched a goal and assist in the victory, and had a strong all-around performance that saw him win 8 of 12 duels as he teamed up with fellow Team of the Week selection Lachlan McLean to lead Triumph SC’s attacking line in a bounce-back win against the club’s regional rival. 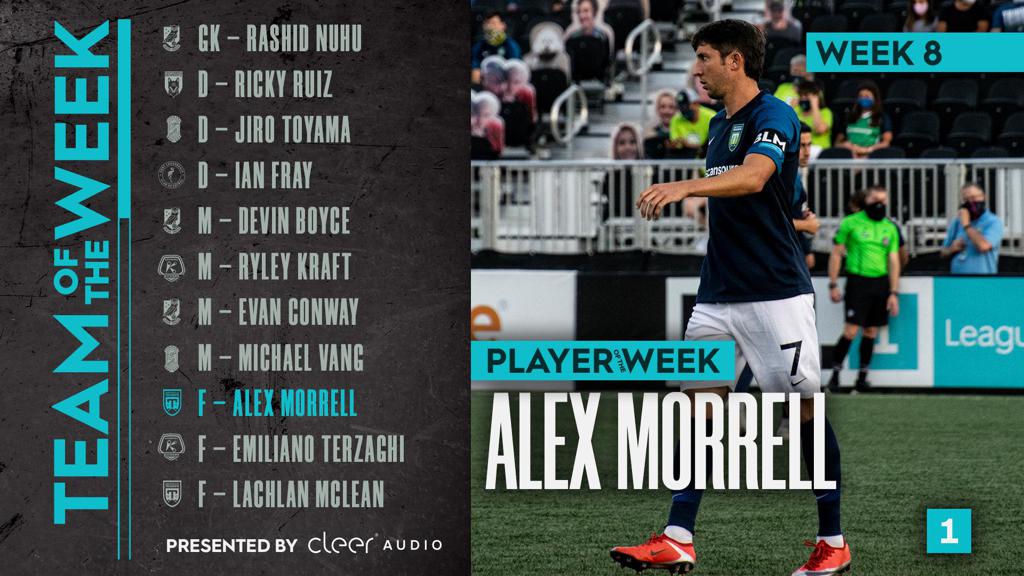 GK – Rashid Nuhu, Union Omaha: Nuhu recorded a two-save shutout, and had one punched clearance and 13 recoveries as Omaha earned a 1-0 victory against Orlando City B on Sunday night.

D – Ricky Ruiz, Chattanooga Red Wolves SC: Ruiz won 8 of 9 duels and 2 of 2 tackles, completed one key pass and 24 of 35 passes overall and completed 2 of 3 dribbles in the Red Wolves’ 1-1 draw with Fort Lauderdale CF on Saturday night.

D – Jiro Toyama, Forward Madison FC: Toyama had two key passes and completed 62 of 67 passes and 2 of 2 dribbles, while also winning 6 of 11 duels and 2 of 2 tackles in Madison’s 4-0 victory against the New England Revolution II on Friday night.

M – Devin Boyce, Union Omaha: Boyce recorded one assist, completed 26 of 33 passes overall, completed 2 of 3 dribbles and won 7 of 12 duels and 4 of 5 tackles in Omaha’s 1-0 win against Orlando City B on Sunday night.

M – Ryley Kraft, Richmond Kickers: Kraft had one assist, two key passes and three shots while completing 32 of 36 passes and winning 5 of 5 duels for the Kickers in their 2-2 draw with FC Tucson on Saturday night.

M – Evan Conway, Union Omaha: Conway scored the lone goal of the game, had one key pass and completed 12 of 14 passes overall while winning 12 of 17 duels in Los Buhos’ victory against Orlando City B on Sunday night.