USL League One Team of the Week – Week 5

TAMPA, Fla. – USL League One announced the Team of the Week Presented by Cleer Audio for Week 5 of the 2020 regular season on Tuesday, with Forward Madison FC’s Don Smart earning Player of the Week honors following a standout display that led the Flamingos to their first win of the season against South Georgia Tormenta FC last Friday night.

Smart recorded a goal and two assists to send Madison to victory against South Georgia, a victory the club will hope kick-starts its campaign to reach the USL League One Final. Smart played a role in the final three goals of the Flamingos’ 4-0 victory, which also stood as the highest scoring output by a side in the League One season so far. 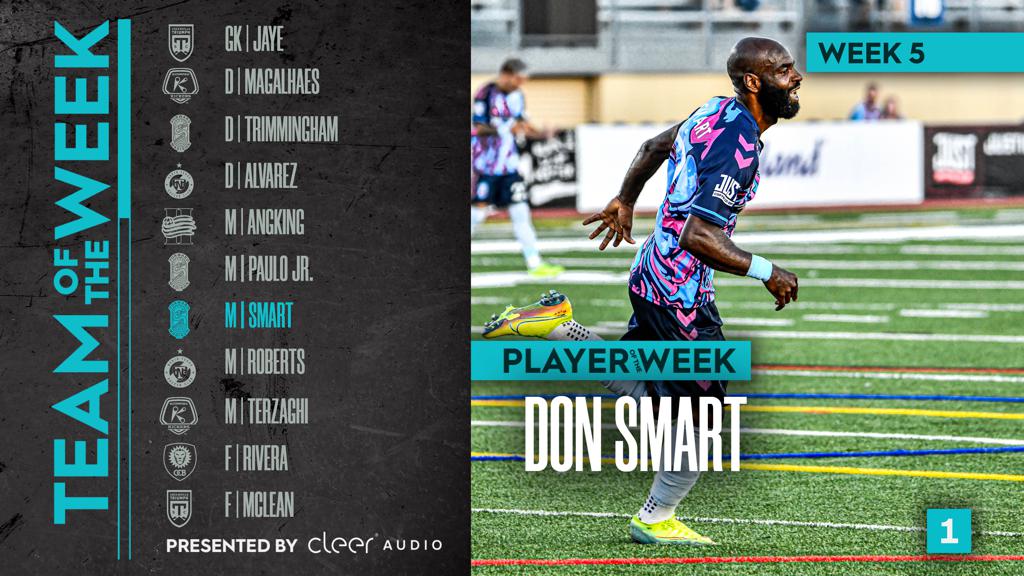 GK – Dallas Jaye, Greenville Triumph SC: The reigning League One Goalkeeper of the Year recorded a three-save shutout as Greenville took a 1-0 victory against Chattanooga Red Wolves SC for its fourth win in five outings this season.

M – Paulo Jr., Forward Madison FC: The Brazilian had one goal, one assist and won 10 of 13 duels while completing 3 of 4 dribbles in a strong all-around display during Madison’s 4-0 victory against South Georgia Tormenta FC.

M – Don Smart, Forward Madison FC: Smart was back to his best for the Flamingos as he recorded one goal and two assists while notching four key passes and completing 21 of 26 passes overall in his side’s win against Tormenta FC.

M – Thomas Roberts, North Texas SC: Roberts had one goal but showed off his skills as a playmaker with four key passes among 22 of 27 completed passes overall in North Texas’ 3-3 draw against the New England Revolution II.

M – Emiliano Terzaghi, Richmond Kickers: Terzaghi continued his rich vein of form as he scored once on four shots overall, completed 5 of 8 dribbles and won 11 of 19 duels in Richmond’s 2-1 win against FC Tucson.