Get the Henny! Soccer and a Celebration of Black Culture

Catching up with the creators of the Henny Derby, a new style of rivalry in League One 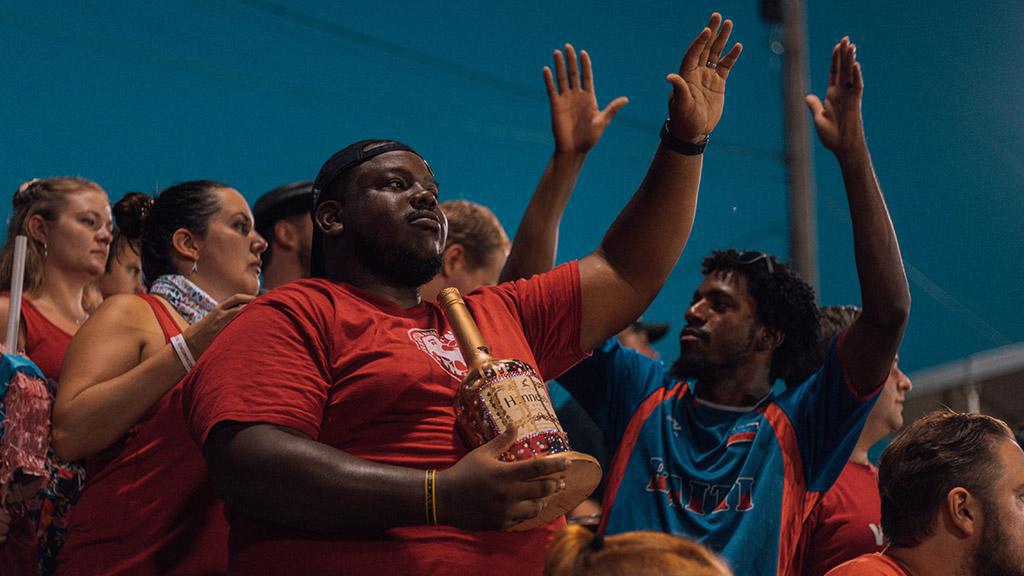 The Richmond Kickers and Forward Madison FC will square off on Saturday night in the Henny Derby, a rivalry that has shown 'the creativity, outlet and inclusiveness that black supporters bring' according to League One Fun podcast's Jason Weintraub.

On the face of it, there’s not much that would connect the Richmond Kickers and Forward Madison FC.

The Kickers are now in their 28th season, one of the country’s most historic clubs, with a rich and cherished history that includes league titles, famous players, and a legendary lift of the the Lamar Hunt U.S. Open Cup trophy.

Forward Madison, on the other hand, are the new boys of American professional soccer. Nascent, good on the field, and a sensation off it. With a glittering selection of kits and off-the-charts social engagement, the Flamingos represent a new type of professional soccer organization.

The two clubs… they're just different.

But if you peel back the layers, there is a common thread. Despite their geographic and generational differences, Forward Madison and the Richmond Kickers are both home to two of only a few Black-led, Black-created supporters’ movements in the country.

And that’s how the Henny Derby, a celebration of black culture and one of the country’s most slept on rivalries, came to be.

“Really how it started was over a Twitter conversation between me and [Featherstone Flamingos member] Kyle [Carr]”, said River City 93’s Elliot Barr. “Even how me and Kyle met was kind of weird. I started River City 93, and I started hearing about this Black supporters’ group up at Forward [Madison], and I was like, ‘There’s no such thing as a Black supporters’ group. Those things don’t exist!’” 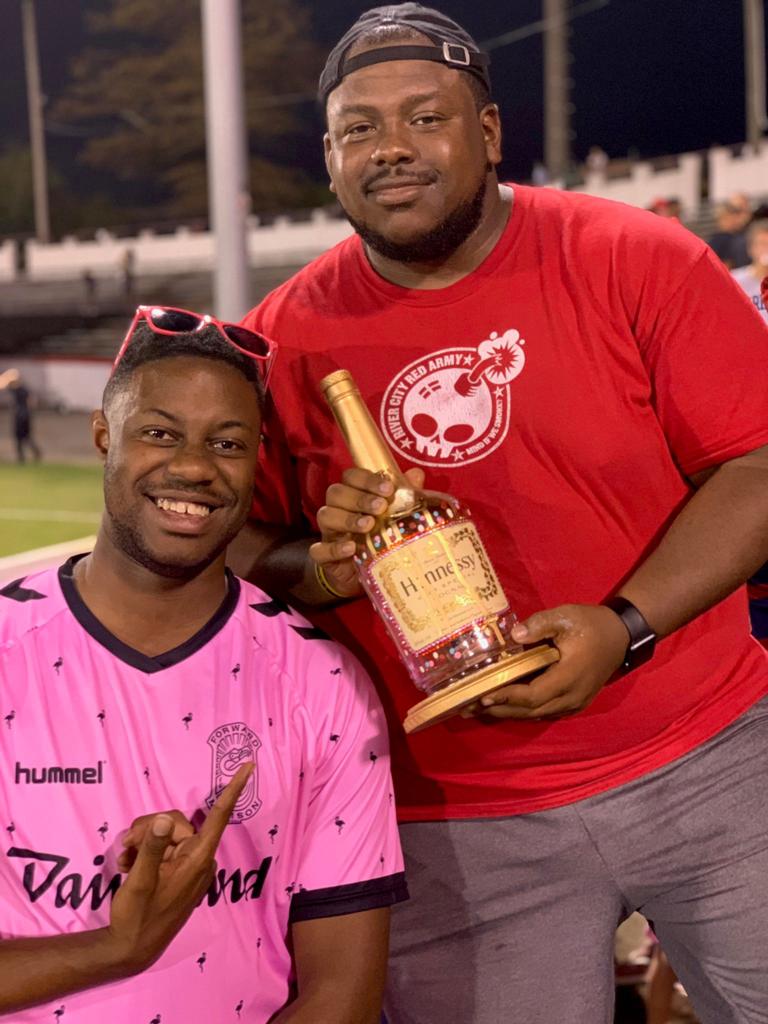 The Featherstone Flamingos and River City 93 have dueled - and celebrated - over Hennessey since the rivalry began between the two Black-led, Black-created supporters’ groups last year.

For Barr, Madison somehow seemed the logical team for the Kickers – whose boiling tensions with the Charleston Battery had been put on the back burner with the two clubs now in different divisions – to make a rival of. After all, South Georgia Tormenta FC and Greenville Triumph SC had their battles going, and given the hype around Madison, who better to set them straight than the league’s true OG club?

“Forward Madison, everyone knows, they can tweet no wrong,” said Barr. “For us here at Richmond, that was our starting point. We wanna knock them off their perch, we want to be the team that knocks them down a peg. So, I hit up Kyle right before the game against Forward Madison and was like, ‘Yo, you want to bet a bottle of Hennessey on the game?’ And he was like ‘Yea sure, whatever.’”

Narrator voice: It did, in fact, happen…

A goal by Daniel Jackson for the Kickers decided the first meeting before the Flamingos turned the tables with a 1-0 win of their own a couple of weeks later. That set up a third and final regular season meeting in Richmond, and Featherstone’s first trip to Virginia.

“It was that third match where it all really blew up,” said Carr. “It was in Richmond, and I know Elliot was trying to get myself, April, and Chris, who were the other co-founders of Featherstone – Madison’s Black-led and Black-created supporters group who operate under the umbrella of the club’s primary SG, The Flock – down to Richmond.

“We just had different Black supporters from all over America coming down for this match. It was a crazy time, the kickoff, the tailgate – I think if you wanted to showcase Black supporter culture in America, that was the place to be.”

Fan culture has taken all shapes and forms in American soccer. The majority has been based on the models in Europe and South America and since adapted by American fans both at the club and international level. For both Carr and Barr, while they comingle with their fellow supporters at games, they’re also looking to bring their own culture into the mix.

“There are black supporters that follow soccer and have followed it from Day One, but I don’t think that gets highlighted enough,” said Carr. “That was kind of the purpose of why we wanted to start Featherstone. We had a Latinx based supporter group, we had a women-based supporter group. But we don’t have a Black supporter group. It’s a global game. Black people watch soccer and Black people play soccer in this country. It was about trying to highlight that. In America, soccer is kind of viewed as a rich white sport.

“It’s like if you play in America, you grew up in a community that cares about soccer or you have the money to do so because of how expensive it often is to get involved in the youth setup. It kind of makes it feel like there’s this whole group that’s not highlighted enough. That’s what we’re trying to do with Featherstone, and I think what Elliot’s trying to do down in Richmond. And that’s at the core of what the Henny Derby is all about.”

When they’re not at the stadium, finding ways to bring new fans aboard and open the game up in more urban communities is a focus for both Featherstone and River City 93. Featherstone has worked with FMFC to help local initiatives – the club is selling a Henny Derby Pack this week of which 50 percent of proceeds will go to the YWCA of Madison – while River City 93 is working with the Kickers to open the game up further in the city.

“There’s kids in the urban community that love the game of soccer,” said Barr. “They just don’t have exposure to it. One of our main goals at River City 93 is to bridge that gap. There’s a lot more barriers to break down, but we’ve broken down some.” 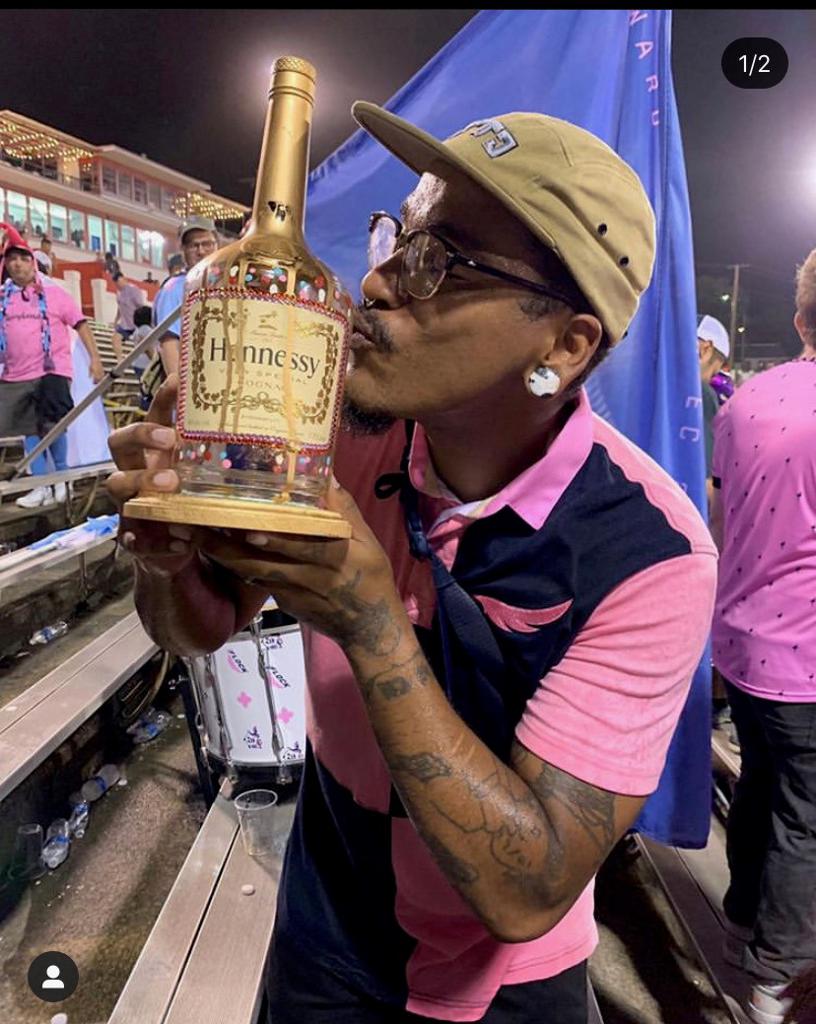 Forward Madison FC claimed the season series with two wins to the Richmond Kickers' one in the 2019 League One season, which meant a celebration for the Featherstone Flamingos after the final meeting at City Stadium.

As much as there is a serious side to the rivalry, though, there’s just as much fun. For the 2020 season, instead of trying to ship bottles of Hennessey to each other after victories or defeats – a task that turned out to be trickier than first thought – there’s a trophy at stake.

“My wife is a teacher and one of her friends is an art designer, and she designed this trophy for us,” said Barr. “It’s kind of like a Henny bottle – it’s half blue, and half red-and-white.”

And the art of having a major rivalry within the stadium while finding a deeper connection to the game and to the culture that surrounds it is what it’s really all about.

“The Henny Derby represents everything I love about local soccer,” said Jason Weintraub of the Beautiful Game Network and League One Fun Podcast. “A supporter-started derby that fans, players, and media have all gotten behind. From the trophy, the supporters who started it, and the community built around it, Black culture has influenced American soccer for years. This derby shows the creativity, outlet and inclusiveness that black supporters bring.” 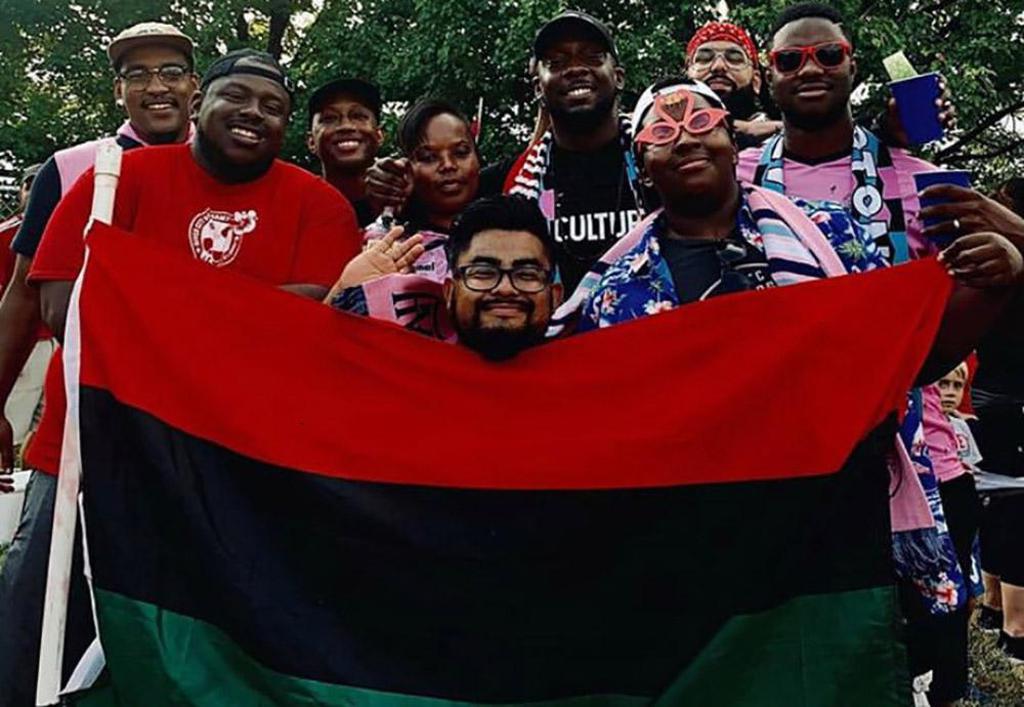 It’s a sentiment echoed by Barr who sees the derby as a window into black culture.

“Look, if you go to a Black cookout or to a Black function, I guarantee you someone there has a bottle of Hennessey,” Barr says with a laugh. “For people like me and Kyle, he’s a Madison fan, I’m a Richmond fan, but we can come together over a bottle of Hennessey and just get to know each other on a deeper level. That’s what the Henny Derby is all about, people from different worlds coming together, having fun, and enjoying soccer.”