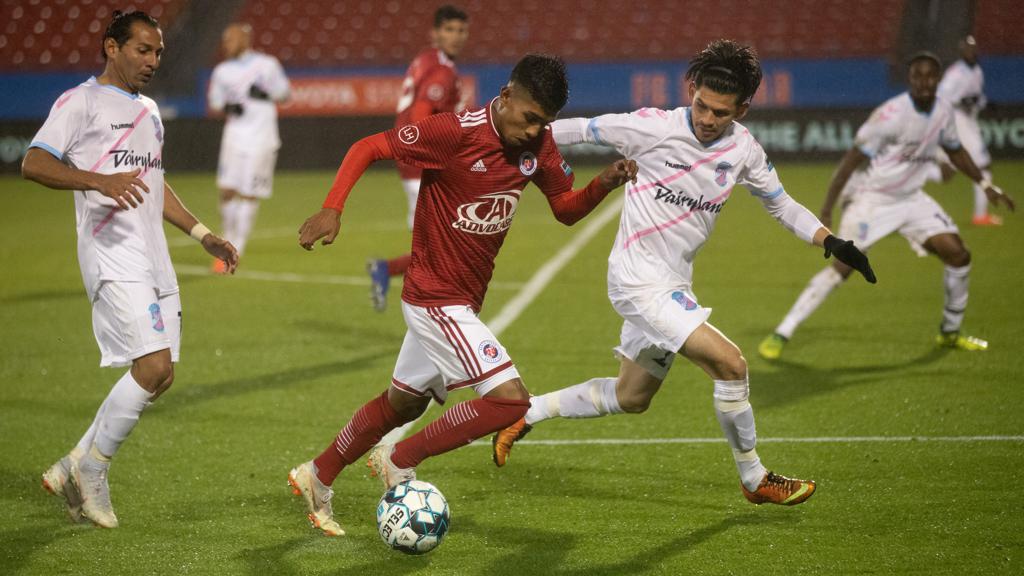 North Texas SC's Gibran Rayo attempts to dribble past Forward Madison's Chrstian Diaz in one of five meetings between the sides in 2019. Photo courtesy of North Texas SC.

The League One Title Holders open the new season against their semifinal opponent in 2019 as North Texas SC hosts Forward Madison FC in the nightcap on Saturday. The match, which will be NTSC’s first at Globe Life Park, will see the reigning champions look to start their season on the front foot against a Forward Madison side with its eye on a playoff return in 2020. Here are three things to watch:

Saturday will mark North Texas SC’s first official match at Globe Life Park. The former Texas Rangers stadium has been retrofitted for soccer and should make for a nice home for NTSC. Head Coach Eric Quill and company will certainly be hoping to start their title defense with a win to get some good vibes in the venue after their home success in 2019.

If we’re to take anything from the 2019 season into the new campaign, it’s that North Texas is good at home. Quill’s side was nearly perfect at former home Toyota Stadium in 2019 -- the club won 12 of the 16 matches played in the stadium, including two playoff games and earned 33 of a possible 42 points at home during the regular season. NTSC scored 31 goals and conceded just 10 while keeping 10 clean sheets and will be looking for more of the same in 2020. If North Texas can get close to those numbers at home this season, it will be in good shape come playoff time.

He’s been recognized as a player to watch in a couple of preseason previews and on Saturday, we’ll get our first look at Wojciech Wojcik in a Forward Madison kit. There are big expectations for the 6-foot-4 center forward and he’ll want to start his campaign off with a goal or two if he can.

Wojcik will be playing against a new-look defense for North Texas, which loaned center backs Brecc Evans and Callum Montgomery to USL Championship sides during the offseason. As NTSC’s new center back partnership finds their footing, look for Wojcik to play with his back to goal and ask for the ball at his feet. The Polish striker will bring midfielders into the game, hoping the spray balls wide, giving him the opportunity to get into the box and get on the end of crosses. With Don Smart and Paulo Jr. running the flanks for Madison, Wojcik should get plenty of quality service on Saturday night.

David Rodriguez is the younger brother of 2019 League One Most Valuable Player Arturo Rodriguez. With Arturo moving on to Real Monarchs SLC in the USL Championship, it’s time for the younger of the Rodriguez brothers to shine.

We don’t know exactly what role Rodriguez will play for Quill this season, but expect him to be a factor in North Texas SC’s attack. David played second fiddle to Arturo in 2019, but now it should be his show to run. With qualities similar to his older brother’s, there’s no reason why David can’t have similar influence in the North Texas attack. Arturo set the bar high, now it’s time for David to try to raise it.