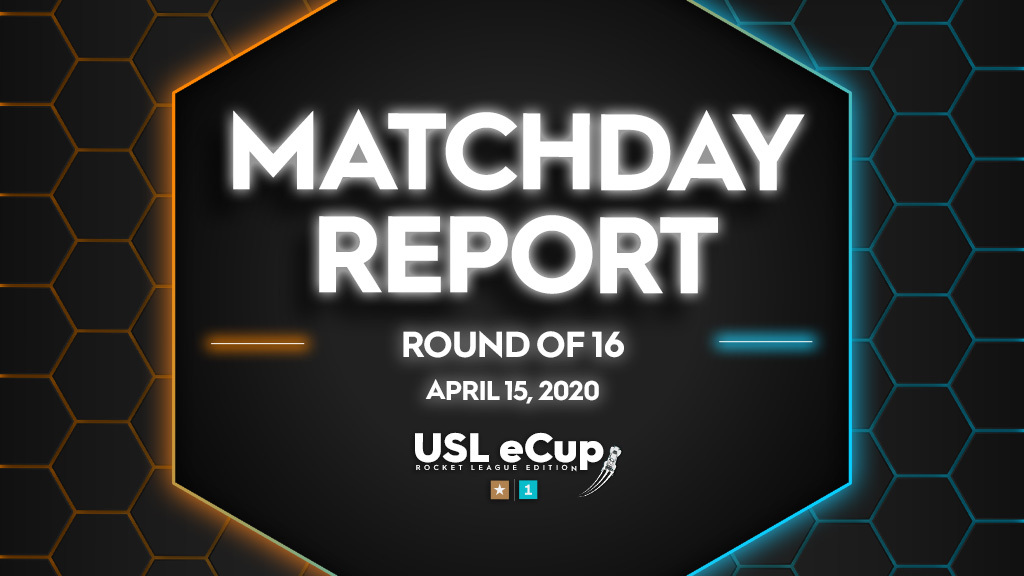 FC Tucson continued its march toward the USL eCup: Rocket League Edition title with victory in the Round of 16 on Wednesday evening, and it was joined by Saint Louis FC, which pulled away in the final two sets of a four-set encounter with Loudoun United, in taking a place in the Quarterfinals next week.

Saint Louis FC’s Keith Mayfield pulled away for victory after a hard-fought opening pair of games (8-4, 4-5, 6-1, 7-1) against Loudoun United FC’s Brandon Williamson to advance to the Quarterfinals.

Loudoun got out to a flying start in Game 1 with the opening goal after just five seconds, but Saint Louis ran off three consecutive goals that opened with a flying finish after a well-controlled cross off the wall on the right to take the upper hand. Two more goals in the span of six seconds around the halfway mark, including an exceptional long-range finish to open, put STLFC even further in control before United mounted a comeback to cut the deficit to two. That proved as close as Williamson would get, however, giving Mayfield the opening game.

Game 2 opened in a similar fashion to the opener as Loudoun struck first again, this time after nine seconds with fine angled finish to the left corner. Williamston then made it a two-goal lead six seconds later, but a two-goal run by STLFC to level set the tone for the rest of the game, which remained tight throughout. Loudoun sacrificed to retake the lead, absorbing a big challenge to regain just past the 90-second mark, and then made a brilliant save to deny a breakaway less than 30 seconds later to hold onto the advantage.

A steal in Loudoun’s defensive end allowed Saint Louis to tie the game up again, however, before a narrow-angle finish put Mayfield ahead for the first time in the contest with 2:06 to play. STLFC almost iced the game with 30 seconds to go as a finish came back off the crossbar, and five seconds later Loudoun leveled as Williamson got to a 50-50 ball in midfield first to launch an impressive finish. Loudoun then evened the series as time expired with Williamson converting well off a rebound from the left end wall.

If there was hope that Game 2 would set up a tense remainder of the series, however, those hopes were soon dashed. Saint Louis’ finishing shone as it ran out to a three-goal lead in Game 3 before Loudoun could respond, and Mayfield simply outfought his opponent on the following faceoff to restore his advantage. STLFC’s ability to time pressure in the Loudoun end proved decisive in pulling away for a lead in the series, and when Mayfield took a five-goal lead two minutes into Game 4 it looked done and dusted. Loudoun pulled back a consolation goal in the final minute, but STLFC’s dominance over the final two games sent it through.

FC Tucson’s Trent Wieland remained perfect for the tournament as he notched 40 goals in a three-game sweep (16-0, 13-1, 11-1) against Forward Madison FC’s Mitchell Meerman.

Tucson got out to an early lead in all three games, opening the scoring in Game 1 as Wieland delivered a cross from near the top of the dome into the penalty area and then finished off the bounce. He then counterattacked perfectly off a faceoff to take a three-goal lead after 29 seconds and kept the consistent scoring coming on his way to a shutout performance.

While Tucson’s pressure limited Madison’s attacking forays, Meerman’s defense proved impressive despite the final scoreline. In Game 2, the Flamingos registered eight saves which helped keep the game close through the opening two minutes as Tucson held only a three-goal lead. As the game wore on, however, Tucson’s pressure began to tell as Wieland’s aerial ability proved too much for Madison to withstand, and while the Flamingos got on the board with 1:14 to play it was only a consolation in another decisive FCT win.

The pattern continued into Game 3, where Tucson scored twice in the opening 15 seconds, the second a rebound effort after Wieland’s initial aerial effort had come off the crossbar and dropped into the six-yard area. Tucson’s use of boost to control descent from on high and finish high into the net – as it had in previous contests – proved a major challenge for Madison to deal with, and allowed Wieland to wrap up another comprehensive victory.