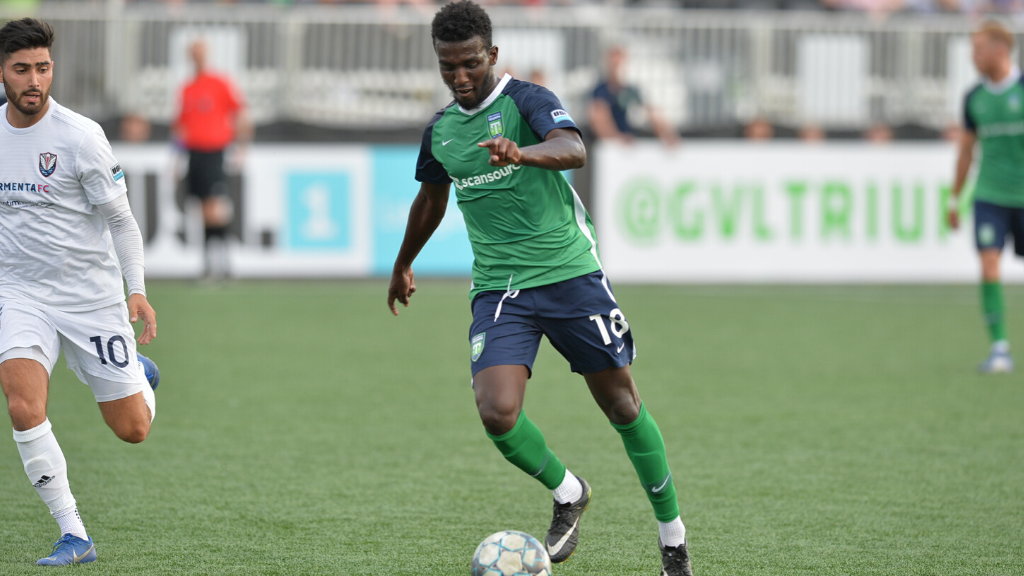 Mohamed made 24 appearances for the Triumph in 2019.

Greenville Triumph SC has exercised the options of Max Hemmings, Omar Mohamed, Chris Brmudez and JJ Donnelly, the club announced this week. Greenville has now announced the return of a large portion of its 2019 squad and the 2020 roster now stands at 13.

Mohamed appeared in 24 matches for the Triumph in 2019, tallying a goal and two assists while creating 37 chances and delivering 15 successful crosses. Mohamed’s performances with Greenville in the inaugural League One season earned him two call-ups to the Somalia Men’s National Team.

Hemmings played 15 matches for the League One Runners-Up before having his season cut short by an ACL injury. Greenville Head Coach John Harkes used Hemmings in a variety of positions and the Brighton, England natvie found success regardless of where he was slotted into the lineup.

Bermudez returns to the Triumph after scoring some of the club’s biggest goals of the season in 2019. The 20-year old midfielder scored the game-winning goal that clinched the side a place in the League One playoffs and scored the lone goal in the semifinals to lead the Triumph to the League One Final.

Donnelly joined Greenville mid-season after a successful League Two season with Tormenta FC 2. The 22-year old made seven starts in the back half of the season in relief of first-choice striker Jake Keegan who suffered a season-ending foot injury in August. Donnelly failed to talley his first professional goal in 2019, but looked dangerous in the attacking third, recording 13 shots and eight chances created.

The group of four joins eight other returners and former Lansing Ignite FC captain Brandon Fricke on Greenville’s 2020 roster. The 13 players on the Triumph’s current roster played a combined 24,528 minutes in 2019.