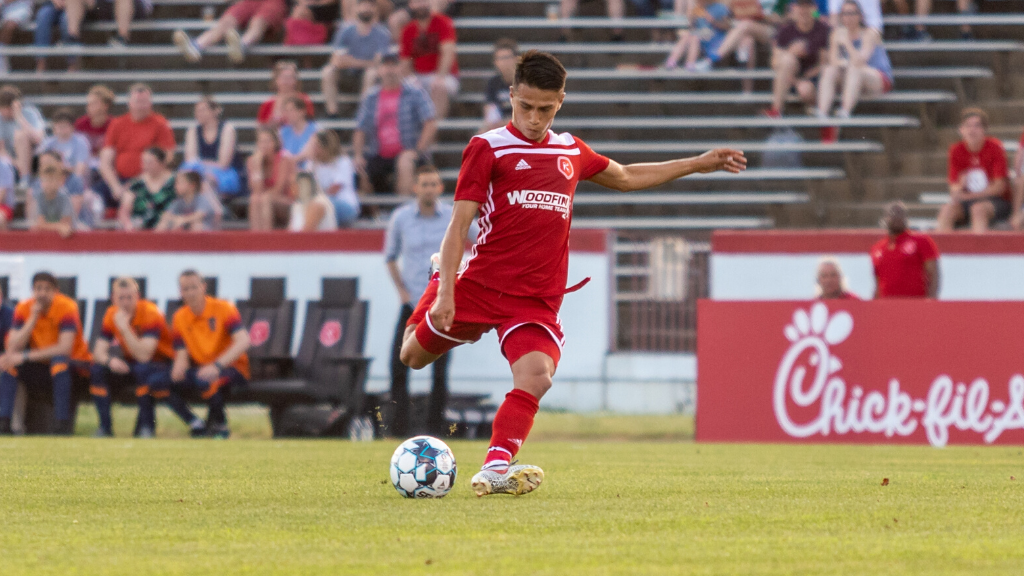 Gallardo was an USL League One All-League First Team selection in 2019.

RICHMOND, Va. – Add the name of Joe Gallardo to a small, but growing, list of League One standouts making the jump to the Championship.

The former United States U-19 international became the second League One player to be purchased this offseason by a USL Championship club, with 2019 USL Championship Final winner Real Monarchs SLC swooping in to acquire the 21-year-old from the Richmond Kickers on Thursday.

Gallardo is the second League One player to move for a transfer fee this offseason, joining fellow League One All-League selection Conner Antley, who in November was acquired by Championship side Indy Eleven from South Georgia Tormenta FC.

The San Diego native’s move comes after a season in which the former Monterrey Academy and Orlando City B player re-established himself as someone to watch as we move into the next decade. Gallardo’s numbers weren’t off the charts in the way of some others in League One, but the spark that made him a standout at the U-17 level for the U.S. Youth National Team program certainly seemed to be back.

His six goals and two assists were accompanied by 48 completed dribbles and 34 key passes, a passing accuracy rate of 74.8 percent on 26.2 passes per 90 minutes and a long pass success rate of 60 percent. While the Kickers missed out on the postseason, Gallardo was regularly the best player on the field as his close control and ability to create clear-cut chances for teammates jumped off the screen. His 11 Big Chances Created during the regular season ranked fourth in the league and doubled the total of his nearest teammate.

That’s plenty to work with for the Monarchs as they restock their roster before the defense of their title while also giving Gallardo a clear pathway to the top flight he seemed destined for five years ago. Within the Real Salt Lake system, the opportunity is there for those able to take it. This has been most notable with the recent promotion of Maikel Chang to the organization’s MLS squad and advancements within the club’s front office.

What makes Gallardo’s story notable, though, is that in a previous time it might not have happened. Two years ago, he was unable to break through with OCB after signing with the club from Orlando’s Academy. Seven appearances without a goal or assist and only one key pass – and the club’s subsequent hiatus in 2018 before joining League One for its inaugural season – could have spelled a difficult road back to the professional ranks.

To his credit, Gallardo redoubled his efforts and backed himself to succeed. He suited up a couple of times in USL League Two for SIMA Aguilas in 2018 and then played his way onto the Kickers’ roster last preseason, the 21st of the club’s signings for the campaign, inked 10 days before its season kicked off. The rest, as they say, is history.

In the bigger picture, meanwhile, Gallardo’s story should signal to other League One players – both present and future – that this is a league that has plenty of eyes watching it from bigger clubs. Nick Moon’s signing with Indy Eleven to join Antley this week after starring for Lansing Ignite FC last season is another indicator of this, and you should expect to see more players that featured prominently in League One’s inaugural season to be announced soon as new additions to other Championship clubs.

As League One continues to grow, the increased professional playing opportunities and other possibilities it brings will ensure that more players like Gallardo have the means to find a way back from setbacks

And that road could end up taking them all the way to the top.