Jaye Eager for Final Game of 2019 with Guam 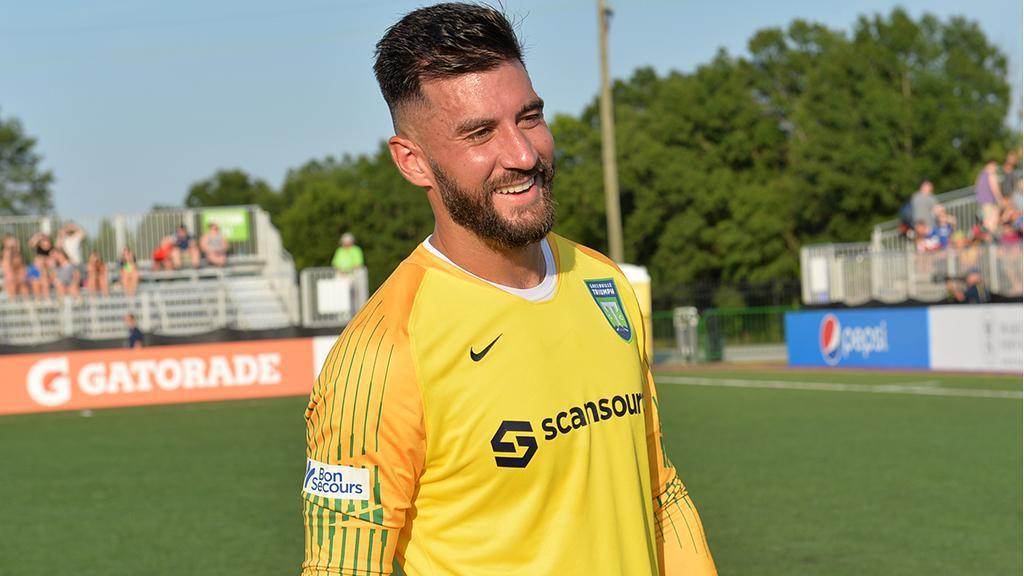 2019 League One Goalkeeper of the Year Dallas Jaye is set to suit up for one more game before the end of the year as Guam takes on the Maldives in 2020 FIFA World Cup Qualifying on November 19. | Photo courtesy Greenville Triumph SC

His first season with Greenville Triumph SC in USL League One may be over, but Dallas Jaye has one more competitive game left this year.

Named the 2019 League One Goalkeeper of the Year last week, Jaye is set to be back in action for Guam next week as it takes on the Maldives on November 19 in 2022 FIFA World Cup Qualifying.

“I’ve been fortunate to be around the full men’s team for Guam for six, seven years now, so it’s something I never take for granted but also something I’m very accustomed to now,” Jaye told the Soccer Down Here podcast recently. “It’s a been there, done that sort of thing where I try to go in with confidence to show that I belong at that level.

“I’m still preparing for that, still training. The offseason has taken a backseat at the moment, but it’s around the corner. I’m looking forward to one more competitive match this year in what will be a big one for us because it’s a very winnable game.”

Earning a first win this campaign in the second stage of Asian qualifying would be another high point for Jaye in 2019 that saw plenty of them for the fourth-year pro. After serving as a back-up at previous stops in the Championship at FC Cincinnati and Phoenix Rising FC, Jaye’s first year as a full-time starter in the professional ranks saw him claim the League One Golden Glove and set a marker for the future with 13 shutouts in the regular season.

Brought to Greenville by his former FCC Head Coach, John Harkes, the 26-year-old Californian has appreciated everything the U.S. Soccer Hall of Famer offered him and his teammates in Triumph SC’s first campaign. That extended in particular to the international field, where Jaye was joined in being called up this year by teammate Omar Mohamed, a first-time selection for Somalia earlier this year.

“You have a guy like Omar, who it was his first international call-up, and I think John gave him all the confidence in the world to go and compete and represent the club well, represent his family and represent his country,” said Jaye. “[Then] he goes and scores a goal [against Zimbabwe] that almost takes his country through to the next round in a game that they were the heavy underdogs. To have John have your back and be in your corner with those types of situations is invaluable.”

While Harkes’ backing helped Jaye’s confidence in becoming Triumph SC’s starter, he believes his experiences with veteran goalkeepers and top coaching staffs in both Cincinnati and Phoenix also helped set the table for the year he had for Greenville.

“I think my biggest improvements came just from game management,” said Jaye. “I benefitted from three years of being in very good professional environments, good goalkeeper coaches, good goalkeeper groups when I was at Cincinnati and Phoenix, but that was all training. The next piece for me was getting the minutes, getting the game management, getting the game decision making, all those things that come with actual matches, down. For me the biggest improvements came there, just because it was something that I hadn’t seen consistently in a couple of years now.”

Now, after helping lead Triumph SC to the League One Final in its inaugural season, finding another level is the main focus for Jaye’s offseason plans.

“How can I take it to a higher level in all aspects of the game?” he said. “Commanding the box, coming for high balls, making the saves I need to make and then a couple of the ones that maybe I shouldn’t have any business making that can change a game and turn a game on its head.  I’ve gone through the season I’ve had and picked some of the things I did like, but I’ve been hammering a little bit more on the things I can work on in the offseason.”

For more from Jaye, check out the full interview at Soccer Down Here’s Spreaker page.