FRISCO, Texas – Arturo Rodriguez scored the lone goal of the game and goalkeeper Kyle Zobeck made the crucial late saves as North Texas Soccer Club claimed the inaugural USL League One Final on Saturday night with a 1-0 victory against Greenville Triumph SC in front of a crowd of 3,245 fans at Toyota Stadium.

Nominated for both the League One Most Valuable Player and Young Player of the Year awards, Rodriguez broke the deadlock in the 60th minute with his eighth goal of the campaign as he earned League One Final MVP honors.

After Rodriguez’s tally had put the hosts in front, Zobeck made sure they remained there with a series of crucial saves that denied Triumph SC the chance to send the game to extra time.

Greenville had taken the initiative from the opening kickoff and almost caught a break in the eighth minute when a low cross from the right by Paul Clowes was redirected off the outside of the near post by North Texas defender Callum Montgomery and behind for a corner.

Four minutes later the visitors could have taken the lead as a clever flick by Carlos Gomez on a pass by Aaron Walker released Triumph SC fullback Tyler Polak as he cut through the midfield and in one-on-one with NTSC goalkeeper Kyle Zobeck, but his chipped finish drifted wide of the right post.

Triumph SC carved out another good chance in the 15th minute when Omar Mohamed wove to the top of the penalty area before finding Chris Bermudez in space on the right side of the box as his near-post shot was parried wide by Zobeck. Soon after, Greenville goalkeeper Dallas Jaye came up with a big save of his own four minutes later on a curling shot by Imanol Almaguer on North Texas’ first serious effort of the night. 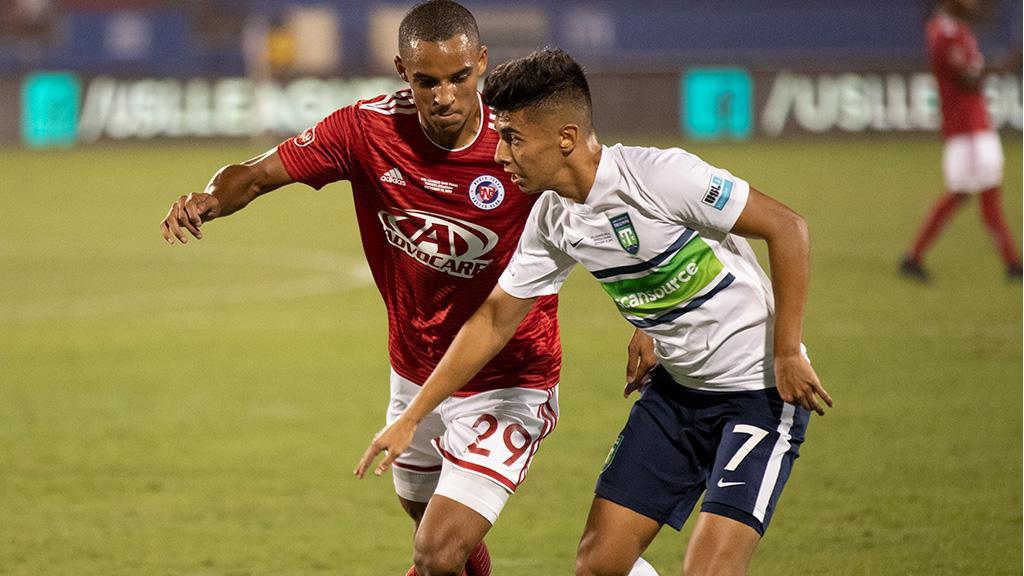 Both teams threatened late in the first half. North Texas went first on a free kick from 30 yards when Rodriguez hit the base of the left post with a powerful shot and saw the rebound carom off the diving Jaye and behind for a corner kick.

Then in first-half stoppage time, Bermudez saw a favorable bounce fall his way off his own through-ball as it hit a North Texas defender, but his finish from the left side of the penalty area was parried away to safety by Zobeck, just out of the reach of Josh Donnelly as he tried to anticipate the rebound.

Rodriguez had another chance for the hosts early in the second half as he cut to the top of the penalty area and flashed a shot just wide of the right post. That was followed by an attempted scissor kick by Ronaldo Damus that went high of the crossbar off a cross from the right by Bryan Reynolds.

On the hour-mark, however, North Texas struck. A good move down the left side released Jonathan Gomez into space, and while Damus couldn’t control Gomez’s low cross cleanly, a missed chance to clear saw the ball fall perfectly for Rodriguez to shoot low into the bottom-right corner of the net before taking off to the opposite end of the field to celebrate with the Dallas Beer Guardians.

North Texas’ goal spurred a response from Triumph SC, which almost hit back four minutes later when an extra pass in the penalty area by Clowes found Gomez for a first-time shot that was smothered by Zobeck. Gomez again went close in the 68th minute as he just turned the corner to get onto a pass by Mohamed in the right side of the penalty area only for his finish to slide just wide of the left upright.

Greenville threatened again with 12 minutes to go when Polak created space for a low cross deep on the left that Mohamed caught cleanly with a first-time finish from 12 yards, but Zobeck was again equal to the task as he made a reflex stop before his defense cleared. Triumph SC again knocked on the door with two minutes remaining only for Zobeck to make a diving, one-handed save as Donnelly’s turning shot arrowed toward the bottom-left corner of the net.

That proved to be the final big chance of the game for the visitors, however, as Zobeck’s seven saves marked an individual high for the season and allowed Rodriguez’s goal to stand as the winner for NTSC.