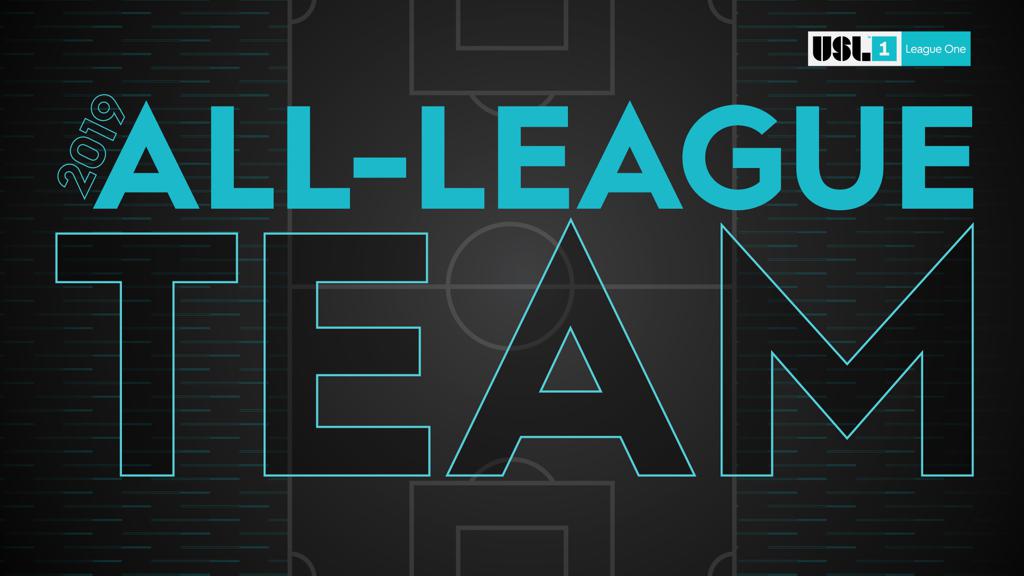 The 2019 USL League One All-League Teams were voted on by club leadership.

Previously awarded the League One Golden Boot and Assists Champion awards, North Texas forward Ronaldo Damus and midfielder Arturo Rodriguez added All-League First Team honors to their individual accolades this season. Damus recorded 16 goals in 20 appearances for NTSC during the regular season, while Rodriguez had 10 assists and seven goals while appearing in every game of the campaign.

The duo was joined by forward Ricardo Pepi – who last week was selected to the United States U-17 National Team that will compete at the 2019 FIFA U-17 World Cup in Brazil later this month – and midfielder Alfusainey Jatta, who each earned selection to the All-League Second Team.

Greenville Triumph SC goalkeeper Dallas Jaye added to his prior League One Golden Glove honor as he took All-League First Team honors after recording 13 shutouts in the regular season. He was joined by defenders Tyler Polak and Cole Seiler, who helped Triumph SC concede only 22 goals in 28 regular-season contests.

Lansing Ignite FC midfielder Tumi Moshobane earned the lone First Team honor for his side after scoring 10 goals and four assists in 20 regular-season appearances. He was joined by defenders Nick Moon and Brandon Fricke and midfielder Rafael Mentzingen, who earned berths on the All-League Second Team, with Mentzingen having led Ignite FC with seven assists and also notched six goals during the regular season. 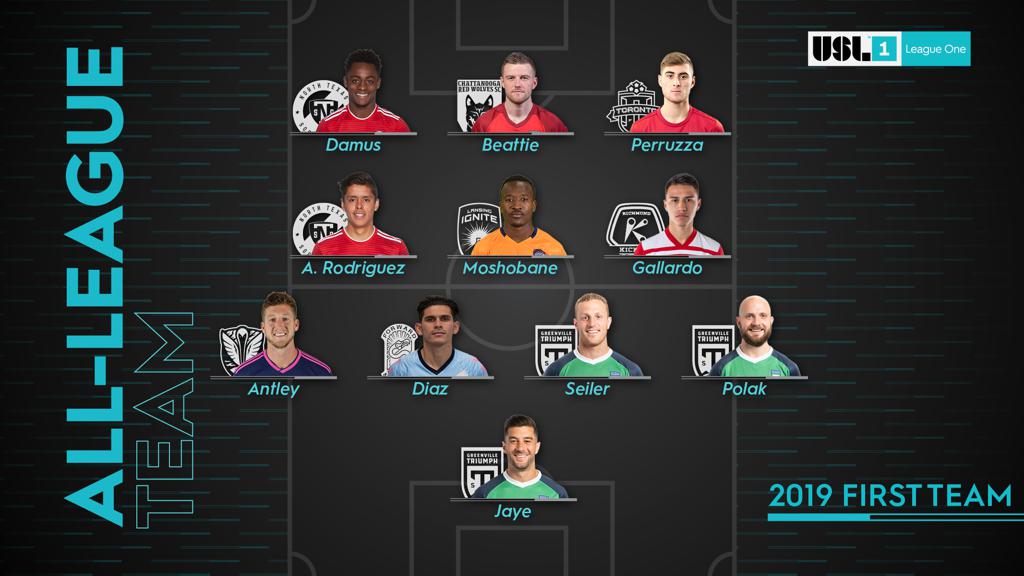 GK – Dallas Jaye, Greenville Triumph SC: Jaye led League One with 13 shutouts and a 0.78 goals-against average as he recorded 47 saves in 27 appearances at a 68.7 save percentage.

D – Conner Antley, South Georgia Tormenta FC: Antley recorded six goals and six assists and had 34 key passes as he posed an attacking threat alongside his defensive solidity, where he led all defenders with 201 recoveries and finished tied for third among defenders with 49 interceptions.

D – Christian Diaz, Forward Madison FC: Diaz won the third-most duels among defenders, taking 191 at a success rate of 64.5 percent, finished second in the league in interceptions with 52 and also ranked in the top five among defenders in recoveries with 165 for the Flamingos.

D – Tyler Polak, Greenville Triumph SC: Polak led the league with 63 interceptions and also ranked in the top ten among defenders in recoveries (160) and duels won (155 at a success rate of 61.3) as part of Greenville’s league-best defense.

D – Cole Seiler, Greenville Triumph SC: Seiler was the lone defender in League One to win more than 100 aerial duels, recording 107 at a 61.8 percent success rate, and also ranked in the top four among defenders in duels won with 176.

M – Tumi Moshobane, Lansing Ignite FC: Moshobane finished tied for fourth in the league with 10 goals – including a league-high four from outside the penalty area – and recorded 40 chances created and four assists.

F – Ronaldo Damus, North Texas SC: Damus scored a league-leading 16 goals at a rate of a goal every 87 minutes on a conversion rate of 31.4 percent, posted the most shots on goal of any player in the league with 31 and also notched three assists.

F – Jordan Perruzza, Toronto FC II: Perruzza finished second in the league with 15 goals, averaging a goal every 120.6 minutes as he accounted for more than one-third of the Reds’ goals during the regular season. 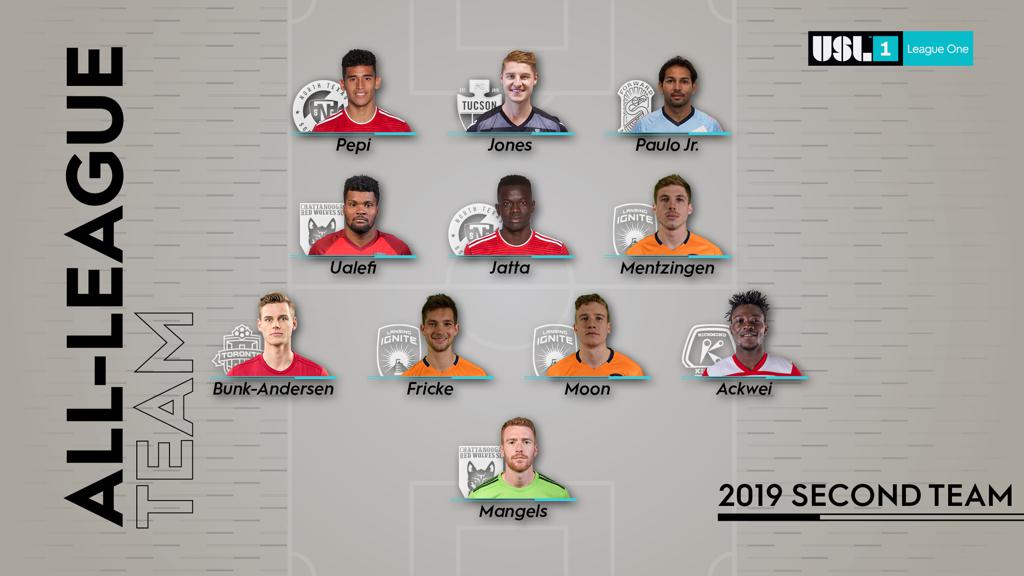 GK – Alex Mangels, Chattanooga Red Wolves SC: Mangels recorded a league-leading 85 saves and 42 catches as he played every minute of the regular season, posting six shutouts and a 69.7 save percentage.

D – Wahab Ackwei, Richmond Kickers: Ackwei tied for fourth in the league in the league with 49 interceptions, ranked third among defenders with 177 recoveries and had two assists on 11 chances created.

M – Alfusainey Jatta, North Texas SC: Jatta served as the lynchpin of North Texas’ midfield, recording 61.7 passes per 90 minutes at an accuracy rate of 82.7 percent and 151 recoveries while ranking second on the team with 144 duels won.

M – Ualefi, Chattanooga Red Wolves SC: Ualefi ranked seventh in the league with 45 interceptions and completed more than 1,000 passes at an accuracy rate of 85.4 percent on 44.4 passes per 90 minutes, recording 16 key passes for the Red Wolves.

F – Jordan Jones, FC Tucson: Jones tied for third in the league with 10 goals on a conversion rate of 22.7 percent and notched three assists and 18 chances created for FCT.

F – Ricardo Pepi, North Texas SC: Pepi scored nine goals at an average of a goal every 114.78 minutes – placing him second in the league among players with multiple goals – as he recorded 52 shots and 21 shots on goal in 12 appearances.

F – Paulo Jr., Forward Madison FC: Paulo Jr. had five goals and five assists on 44 chances created while finishing tied for sixth in the league with 57 shots, of which 24 were on target.