DATA DRIVEN: Who Were League One’s Statistical Standouts in 2019? 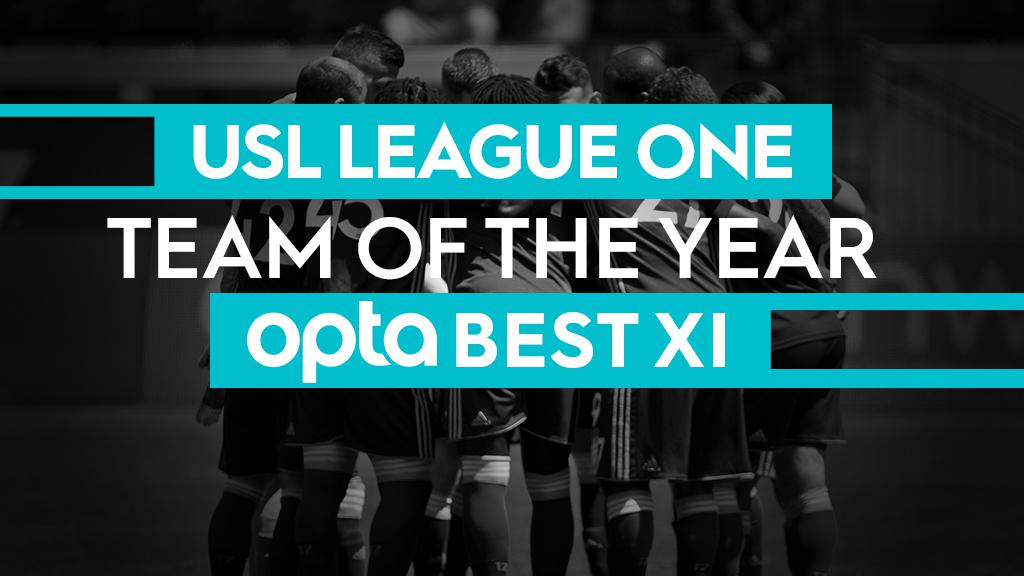 This week, voting has been held for the 2019 USL League One Awards as staff from across the league’s 10 teams cast their ballots that will determine which players earn official season-ending honors from the league.

But what if we took the human element out of the voting, and went purely by statistical production? Thanks to Opta, we have a wide array of data to show how well each player has performed this season, with an official rating out of 10 being assigned to each performance throughout the season.

When League One Golden Boot-winner Ronaldo Damus scored a hat trick against the Richmond Kickers on September 10, it earned a 9.7 rating for the Haitian international.

Taking the average of each performance of each player to record at least 1,260 minutes – that’s 50 percent of the regular season – we’ve created an alternative team representative of the performances put in over this regular season. Below you can find the players, their average ratings and the potential reasons why they’ve drawn favor from the all-seeing computer. 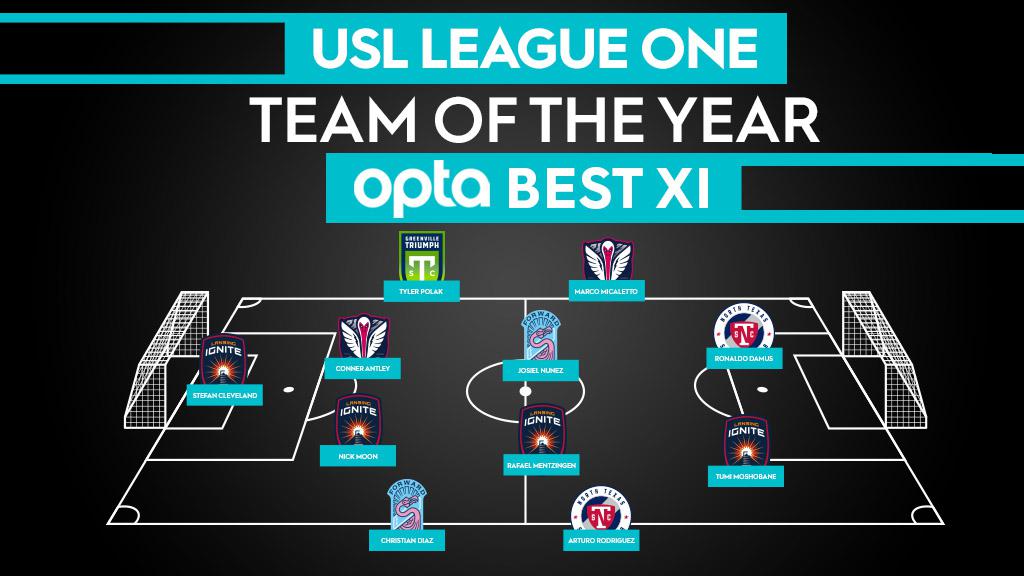 GK – Stefan Cleveland, Lansing Ignite FC (6.58) – The most surprising reveal of this team is its goalkeeper, but Cleveland’s volume of work likely edged him ahead of Golden Glove Dallas Jaye by 0.08 in the final ratings. His 64 saves in 21 games – the second-highest saves per game rate in the league – and saving 2 of 4 penalty kicks looks like the difference by the numbers.

D – Conner Antley, South Georgia Tormenta FC (7.41) – Antley ran away with the highest rating for a defender – and the third-highest rating overall – as his six goals and six assists were backed up by good defensive numbers. Antley recorded 50 interceptions, won 77 percent of his tackles and had 10 blocked shots on top of his strong attacking numbers, which were boosted further by 40 chances created.

D – Tyler Polak, Greenville Triumph SC (7.17) – While he was part of the best defense in the league, Polak’s numbers made him stand out from the group in Greenville. Recording a league-high 63 interceptions and tied for the league-lead among defenders with 51 tackles won at a 67.1 percent success rate, Polak was also in the top six among defenders with 160 recoveries in a standout statistical year.

D – Nick Moon, Lansing Ignite FC (7.17) – Like Antley, Moon got a nice boost from his attacking numbers with six goals and four assists going a long way to his overall rating. But there were good defensive numbers in here to back that up, including winning 193 of 354 duels – second-most cumulatively behind Antley – and recording 29 interceptions while winning 66 percent of tackles.

D – Cristian Diaz, Forward Madison FC (7.15) – Diaz accumulated big defensive numbers in the same vein as Polak, finishing tied with him on 51 tackles won at a higher success rate of 70.8 percent, and also finished tied for second in the league with teammate Eric Leonard on 51 interceptions. Diaz was also one of the hardest defensive regulars for opponents to beat off the dribble, allowing opponents to get past him only 28 times in 26 appearances while recording 12 chances created himself at the other end of the field.

M – Arturo Rodriguez, North Texas SC (7.57) – You probably know about Rodriguez’s standout season from his Assists Champion award and league-best 72 chances created, but what you may not know is how statistically strong he’s been in other facets. For example, the leader in tackles won during the regular season? That was Rodriguez with 61 at a success rate of 67.8 percent this season. Numbers like that, and a passing accuracy rate of 83 percent that only dipped to 70.4 percent in the final third, earned Rodriguez the highest rating of any player this season.

M – Rafael Mentzingen, Lansing Ignite FC (7.27) – Mentzingen recorded the highest average rating of the season for Lansing, and while he was on the field for the side for a little over half the regular season’s minutes, he sure made the most of them. Six goals and seven assists are the headlining numbers here, but Mentzingen also recorded a chance created every 48.8 minutes and made 13 interceptions to prove his worth every time he stepped on the field for Ignite FC.

M – Josiel Nunez, Forward Madison FC (7.16) – The Panamanian attacking midfielder might have only had three goals and four assists for the Flamingos this season, but his consistency on the ball to lead Madison with 51 chances created and a rate of 46.9 passes per 90 minutes that saw him complete 78.2 percent of passes gave him an edge over teammates Paulo Jr., Don Smart and J.C. Banks, all of whom had more goals this season.

M – Marco Micaletto, South Georgia Tormenta FC (7.06) – Tied for eighth in the league with eight goals, Micaletto takes the last midfield slot – narrowly edging out teammate Charlie Dennis – with a high shooting accuracy rate of 62 percent and 34 chances created to go with two assists. Going 4 for 4 from the penalty spot likely boosted Micaletto’s rating – only Tucson’s Jordan Jones scored more from the spot without a miss this season – but it’s hard to fault his consistency as he ranked 16th in minutes played this season.

F – Ronaldo Damus, North Texas SC (7.47) – You’d of course expect the Golden Boot winner to be in this team with Damus’ two hat tricks and 16 goals at a rate of a tally every 87 minutes the big numbers that contributed to his position as the second-highest rated player on the team. Only one of Damus’ goals came from the penalty spot, while three came from outside the penalty area, and he also notched three assists on 16 chances created in a superlative season overall.

F – Tumi Moshobane, Lansing Ignite FC (7.11) – Moshobane was one of four players to reach double-digit goals and gets the nod here ahead of the league’s second-leading scorer Jordan Perruzza of Toronto FC II likely because of his productivity elsewhere on the field. Moshobane’s 40 chances created and four assists doubled up Perruzza’s totals in those categories, and his four goals from outside the penalty area were the most in the league in 2019.