What to Watch For – League One Week 24

With every team in action, which way will the playoff race turn? 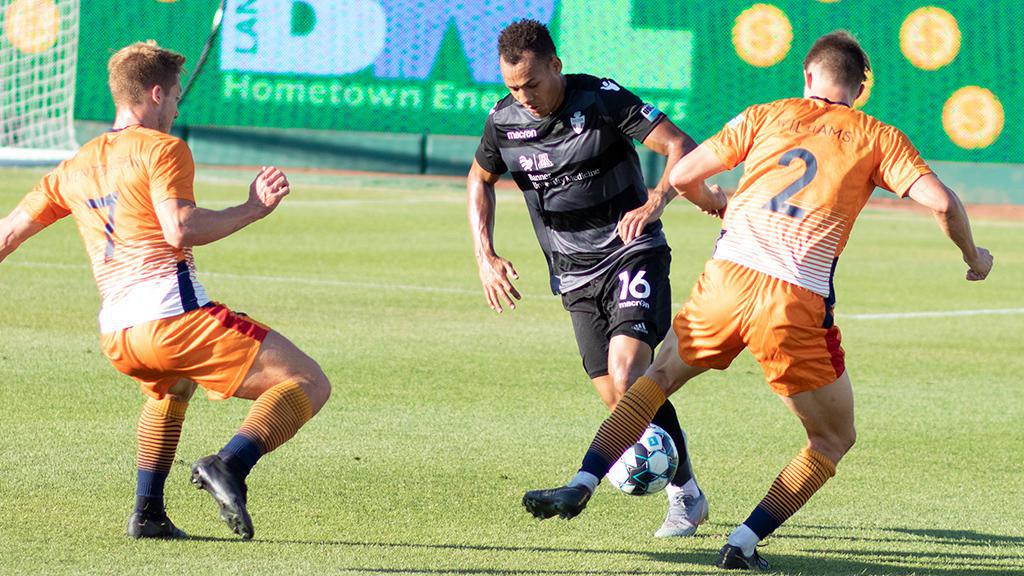 FC Tucson and Lansing Ignite FC square off in the most important game of a five-game slate in League One this weekend on Friday night at the Kino Sports Complex. | Photo courtesy Lansing Ignite FC

The inaugural League One regular season ends in exactly one month, and with every team in action over the next two days there’s still plenty at stake for all-but-one team. Take a look at what odds each side is looking at in the postseason race here before we look ahead to what’s on tap this weekend.

DUEL IN THE DESERT: There was no shortage of controversy the last time Lansing Ignite FC and FC Tucson met, with a disputed handball allowing Tucson to come away with a 2-2 draw in their visit to Cooley Law School Stadium in July. Since then, though, Ignite FC has gone from strength to strength to establish a top-two position on the back of a four-game winning streak which shouldn’t lead to much carryover when the side heads to the west coast for what looks on paper to be the most important game of the weekend. Tucson has closed within a point of the playoff positions after back-to-back home victories to open its run of seven games at the Kino Sports Complex out of eight to close the season, with forward Jordan Jones having found the net in four consecutive games. If Tucson’s streak continues and brings Lansing’s impressive run to an end, it’s going to make for a fascinating final four weeks of the season.

FILL IN THE GAPS: Having gone 3-0-2 in its last five outings, a place in the postseason is in the third-place Greenville Triumph SC’s hands as it heads to play the Richmond Kickers on Saturday night, but Head Coach John Harkes is going to have to do without two key pieces called up for international duty. The first is goalkeeper Dallas Jaye, who has played every minute of the regular season so far but is currently away for World Cup Qualifying with Guam – Jaye started as the Matao fell 1-0 to the Maldives very early on Thursday morning. Also absent is Omar Mohamed, who made history on Thursday as part of a Somalia side that won its first World Cup Qualifier in team history with a 1-0 win against Zimbabwe. Greenville’s biggest strength has been its defensive solidity this season – its 51 shots on goal conceded are by far the fewest in the league – which should make life at least somewhat comfortable for likely starting goalkeeper Miguel Uribe, but with the Kickers having shown some serious signs of life last weekend in South Georgia, Greenville will need to keep its guard up.

ONE FINAL DRIVE: Considered to have a five percent chance to reach the playoffs from their current position, reality says the Richmond Kickers aren’t going to produce enough results over their final seven games to overcome a seven-point gap to the top four positions. But if you looked at some of the social media posts being sent out by their players after last Saturday’s emphatic 4-1 victory against South Georgia Tormenta FC, you got the impression that the next thing to be sent into the Twitterverse by forward Joe Gallardo was Han Solo’s old line: “Never tell me the odds.” There’s never been a question about the talent that the Kickers can put out on the field, just the consistency with which it can produce, which makes its game against Greenville on Saturday the perfect chance to make everyone else above that fraction more nervous that a run is coming. And given the odds are 20-1 rather than 3,720-1 – the odds of successfully navigating an asteroid field – Richmond certainly doesn’t look like it’s willing to go away without a fight.

RUBBER MATCH: The truest six-pointer of the weekend is set for Breese Stevens Field on Saturday night when Forward Madison FC hosts South Georgia Tormenta FC with both teams sitting on 32 points, but the Flamingos above the playoff line in fourth thanks to their nine wins this season. It’s a game where the first goal could mean plenty, with Madison having only drawn once this season after scoring the opening goal, and Tormenta FC having not dropped a point at all on its travels when it has held a lead. With South Georgia struggling for form, though, the onus should be on the Flamingos to try and get out to a fast start in front of their own fans in a similar fashion to when Don Smart’s 16th-minute goal paved the way for a 2-1 win when the teams last met at Erk Russell Park on July 6. If Madison hit the front early, it could be well on its way to a vital three points at the end of the night.

BREAK OUT OF THE PACK: The first team with a chance to make a statement over the five-game slate this weekend is Chattanooga Red Wolves SC, which visits Toronto FC II for a Friday evening clash at the BMO Training Ground. To do so, however, Head Coach Tim Hankinson’s side is going to have to break a three-game winless streak that has seen it lose twice since mid-August and a road record that has seen the Red Wolves win only twice in 12 attempts this season (2-6-4). At the center of both has been lack of goals, with the Red Wolves sitting ninth in the league with nine goals on their travels and only one goal in their last three games overall. While Steven Beattie has produced reasonably consistently with eight goals in 22 games, more is going to be needed down the stretch from his attacking colleagues including Eamon Zayed (five goals in 17 games) and Sito Seoane (four goals in 23 games) if Chattanooga’s playoff chances aren’t going to be dashed.