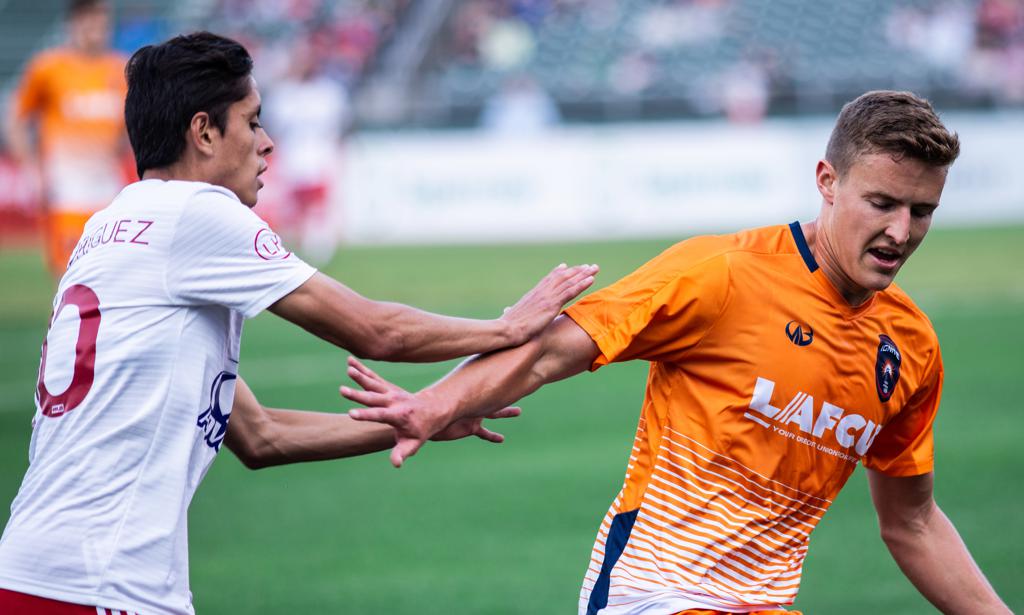 Lansing is coming off back-to-back victories against Orlando City B that extended the league’s longest current unbeaten streak to eight games, while North Texas snapped a winless run with an impressive 2-0 win on the road against Chattanooga Red Wolves SC last Saturday. Here are three things to watch as the league’s top sides meet for the third and final time in the regular season on Thursday night at Cooley Law School Stadium.

Lansing’s Rafael Mentzingen has come on strong in the second half of the season to assert himself as one of the league’s best attacking players, while North Texas’ Arturo Rodriguez has been one of the most consistent playmakers in League One’s inaugural season.

Mentzingen has scored four goals and tallied two assists in his last six matches, playing an integral role in Lansing’s ascent to the top of the League One standings. With permission to roam from Head Coach Nate Miller, he’ll pop up out wide, up top, and underneath the striker.

Regardless of where Mentzingen positions himself on Thursday night, he’ll be dangerous. His pace and power help jumpstart the Ignite’s counterattacks, but he also has the technical ability to break down defenders and find the final pass. If North Texas gives Mentzingen a look at goal, he’ll likely make them pay. He leads the Ignite in scoring with five goals despite starting just nine matches this season.

Rodriguez is more of a traditional No. 10, primarily sitting underneath Ronaldo Damus or Ricardo Pepi. The 20-year old midfielder leads the league in assists with seven, regularly picking out cutting final passes that spring his teammates on goal.

Damus has stolen the headlines during North Texas’ inaugural campaign, but Rodriguez is the one who makes the side tick. He’s an incredibly accurate passer and is deadly from set pieces.

Look for Rodriguez to be the centerpiece in North Texas’ up-back-through motion, playing into the striker, getting it back and playing through to advancing runners. Despite being labeled as the pass master, Rodriguez will find the back of the net if given a clean look, a notion Lansing should be fairly familiar with after he scored in both of the previous meetings between the two sides this season.

Restarts had a significant impact on the results of the two matches between Lansing and North Texas in May and June.

In the first meeting at Cooley Law School Stadium, Mentzingen scored from corner kick before Alex Bruce caught the North Texas defense sleeping on a throw-in to give the hosts a 2-0 lead. Pepi’s stunning free kick from the left flank triggered a late-game comeback for visiting North Texas on that occasion.

In the second fixture, North Texas took advantage of Rodriguez’s accurate free kick service to score the first goal of a 3-1 win, with Damus’ header off the post being seized upon by Callum Montgomery on the rebound to finish.

Lansing is the second-most fouled team in the league and leads all clubs in goals scored from set pieces. Combine that with the quality North Texas will have over the ball on their set pieces and it looks likely that restarts will once again play a key role in Thursday night’s match.

A Clash of Styles

Thursday’s match-up pits the two highest-scoring teams in the league against one another. North Texas leads League One in goals scored per game with 1.65 and Lansing is not far behind with 1.5 goals per game, but the sides have utilized vastly different playing styles to become the most dangerous teams in the league.

The Ignite are deadly on the counter, utilizing the pace of players like Mentzingen, Elma N’For, and Tumi Moshobane and the passing ability of midfielders Ivo Cerda and Xavier Gomez to transition from defense to attack with blistering speed. Lansing’s ability to execute on the counter has resulted in quality scoring chances in just about every match, with the side scoring four fast-break goals and recording 15 fast-break shots in addition to 32 of its 35 goals this season having come from inside the 18-yard box.

Conversely, North Texas looks to break teams down, electing to play through its midfield rather than skip it in transition. NTSC leads the league in passes completed per match with 398, while Lansing sits fifth with 366. NTSC Head Coach Eric Quill’s side builds out of the back, giving time for its outside backs to move forward and join the attack.

Rodriguez and fellow NTSC midfielders Alfusainey Jatta and Jorge Almaguer all rank in the top 10 in average completed passes per match in the league. Look for them to get on the ball early on Thursday night to try to dictate the pace of the match.

Both sides have demonstrated the ability to adjust and play different styles as needed, but they’re at their best when playing these styles. Regardless of lineups or tactics, fans should expect goals on Thursday night. In the previous two meetings between Lansing and North Texas, the sides combined for 57 shots and eight goals.