Chattanooga’s Beattie Named League One Player of the Week

TAMPA, Fla. – Chattanooga Red Wolves SC forward Steven Beattie has been named the USL League One Player of the Week for Week 13 of the league’s inaugural 2019 season.

Beattie earned the honor after recording the first hat trick in the Red Wolves’ history on Saturday night against Greenville Triumph SC, a feat that earned Chattanooga a 3-2 victory and its third win in its last four outings to put it on the doorstep of the playoff positions in the League One standings. 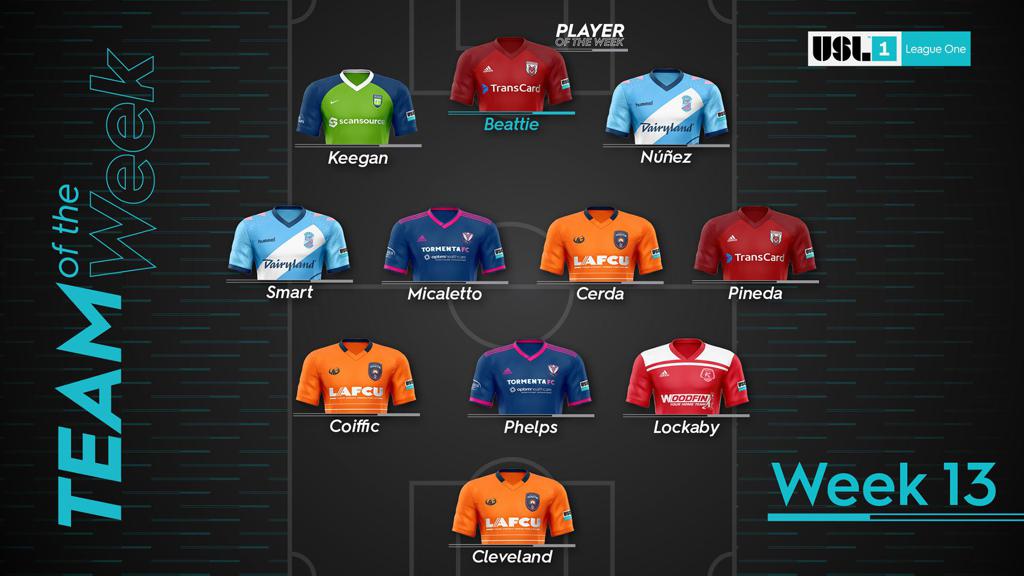 D – Kevin Coiffic, Lansing Ignite FC: Coiffic had a pair of strong performances in Lansing’s two shutouts victories, recording 13 recoveries and six interceptions, and found the net on Saturday against Orlando City B.

D – Josh Phelps, South Georgia Tormenta FC: Phelps made nine recoveries and two interceptions while completing 36 of 40 passes as Tormenta FC held the Kickers without a shot on goal in a 1-0 victory on Saturday night.

D – Eli Lockaby, Richmond Kickers: Lockaby recorded seven recoveries, completed 32 of 38 passes and won 4 of 7 duels in a solid display in Richmond’s back line on the road against Tormenta FC.

M – Marco Micaletto, South Georgia Tormenta FC: Micaletto scored from the penalty spot and completed 15 of 20 passes to lift South Georgia to victory against the Richmond Kickers and into first place in the standings.

M – Ivo Cerda, Lansing Ignite FC: Cerda was a model of efficiency throughout Lansing’s two victories on the week, completing 95 of 108 passes while winning 20 of 32 duels and recording 15 recoveries and seven interceptions for Ignite FC.

F – Josiel Núñez, Forward Madison FC: Nunez had one goal and three key passes, while completing 22 of 24 passes overall in a stellar all-around display for the Flamingos in their victory against North Texas SC.