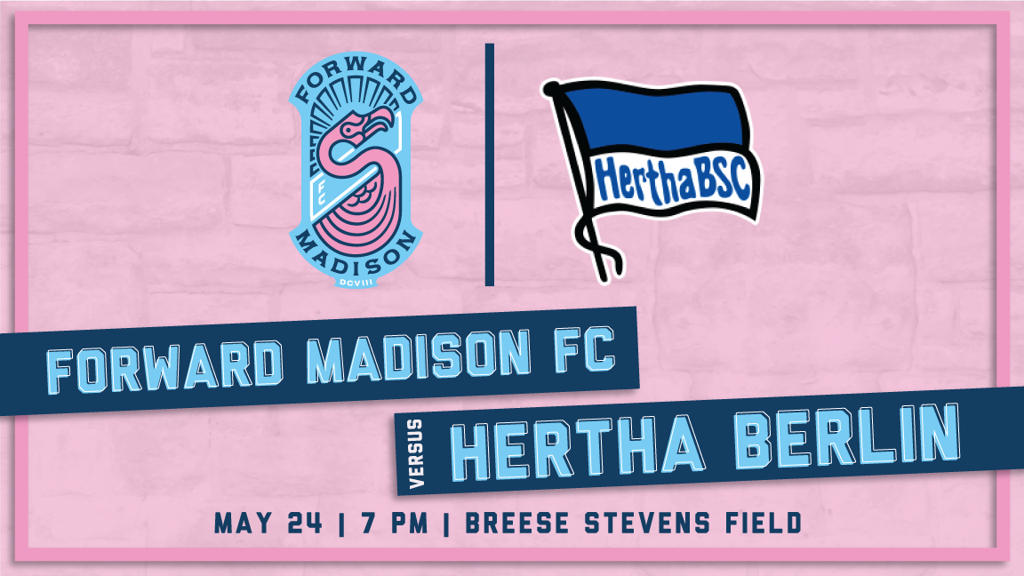 MADISON, Wisc. – Forward Madison FC announced on Tuesday night it will host German Bundesliga side Hertha Berlin in an international friendly on May 24 at 7 p.m. CT at Breese Stevens Field. Forward Madison season ticket holders will have this prestigious match included in their plans, the 17th ticket of the package. The general public will be able to buy tickets starting on March 29 at 10 a.m. CT.

Founded in 1892, Hertha Berlin is the biggest soccer club located in Germany’s capital, Berlin. Hertha, also known as “The Old Lady,” was a founding member of the German Bundesliga and remains the only club in Berlin in Germany’s 1st division. Hertha Berlin has recently enjoyed a run of success with consecutive qualifications for the Europa League.

According to Forward Madison Managing Director Peter Wilt, Madison’s soccer fans will be delighted to have a world-class soccer team coming to town.

“This is a major international club and we’re thrilled to bring Hertha BSC to Madison,” Wilt said. “I’d like to thank German agency BSports Management and its Managing Director Boris Kalff for their assistance in securing this match. We’re thrilled that we have been able to include tickets to see first division clubs from Mexico (Queretaro), the United States (Minnesota United) and now Germany (Hertha BSC) in our season ticket packages.”

Season ticket holders will have the opportunity to secure additional tickets Thursday in their private pre-sale before they go on sale to the general public Friday.

“We are excited to come to the capital of Wisconsin and play against Forward Madison FC. Coming to Madison is another highlight on our US Tour and we are really looking forward to it," said Hertha Berlin Managing Director Michael Preetz.